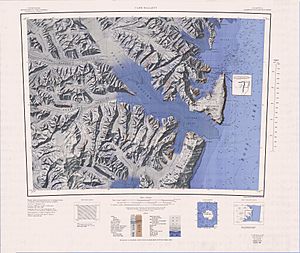 The peninsula is an elongated shield volcano complex similar to the Adare and Daniell peninsulas. It forms part of the Hallett Volcanic Province of the McMurdo Volcanic Group. Basaltic lava of the Hallett Peninsula has been dated to 6.4 ± 0.4 million years old.

All content from Kiddle encyclopedia articles (including the article images and facts) can be freely used under Attribution-ShareAlike license, unless stated otherwise. Cite this article:
Hallett Peninsula Facts for Kids. Kiddle Encyclopedia.