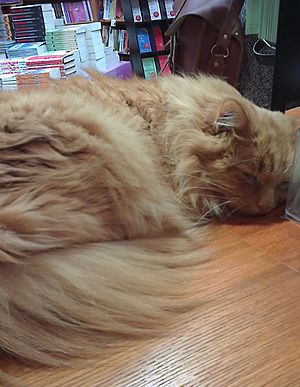 Hamish McHamish (1999 – 11 September 2014) was a Scottish celebrity ginger cat. The cat lived in the town of St Andrews, Fife, where he was an icon. He came to national and international fame after the book Hamish McHamish of St Andrews: Cool Cat About Town was published. The cat was owned by Marianne Baird, a retired BBC producer. He had a Facebook and Twitter page, where he gathered tens of thousands of follows.

Hamish McHamish died from a chest infection on 11 September 2014 in St Andrews. He was 15.

All content from Kiddle encyclopedia articles (including the article images and facts) can be freely used under Attribution-ShareAlike license, unless stated otherwise. Cite this article:
Hamish McHamish Facts for Kids. Kiddle Encyclopedia.