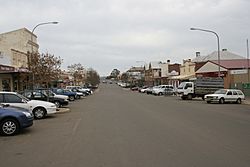 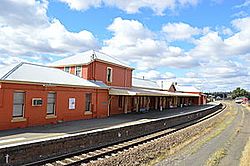 Harden-Murrumburrah is a township and community in Hilltops Council and is located in the South West Slopes region of New South Wales in Australia and is adjacent to both the Canberra region of the Australian Capital Territory and the Riverina Region in the southwest area of NSW. The town is a twin town between Harden and Murrumburrah (which is noted as one of the earliest settlements in the southwest of New South Wales).

The town is traversed by the Burley Griffin Way, the major link from and between the Riverina and the Hume Highway near Yass, and ultimately Sydney, Canberra and the coast. Cunningham Creek runs along the edge of the town.

The Olympic Highway traverses the western end of the shire and is the major link through the central west to the Blue Mountains and from there to the Sydney region.

Harden is 3½ hours away by road from Sydney, and 1½ hours from Canberra and Wagga Wagga. The shire is accessible via the XPT passenger rail service.

Before European settlement the Harden area was inhabited by the Wiradjuri people. Hume and Hovell passed nearby in 1824. In the late 1820s, the 'Murrumburra' was established. Its superintendent, James Kennedy, established an inn on the townsite in the late 1840s. Gold was found in the area in the 1850s.

A railway station was opened one km east of Murrumburrah on the Main Southern line in 1877 as Murrumburrah Station, but changed its name to Harden Station a year after the opening of a new station in Murrumburrah in 1879. Harden has remained as the main station and, as a result, became the main town.

The Main Southern Railway passes through Harden which was once one of the great railway towns. NSW TrainLink provide four XPT services passing through the town daily, two each way, an Xplorer service to Griffith on Saturday returning Sundays and a daily coach service between Cootamundra and Canberra.

All content from Kiddle encyclopedia articles (including the article images and facts) can be freely used under Attribution-ShareAlike license, unless stated otherwise. Cite this article:
Harden, New South Wales Facts for Kids. Kiddle Encyclopedia.