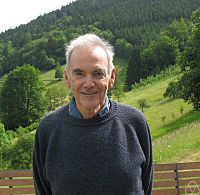 Harold Widom (September 23, 1932 – January 20, 2021) was an American mathematician. He was best known for his works to operator theory and random matrices. He was appointed to the Department of Mathematics at the University of California, Santa Cruz in 1968 and became professor emeritus in 1994. He was born in Newark, New Jersey.

In 2006, Widom became a member of the American Academy of Arts and Sciences.

All content from Kiddle encyclopedia articles (including the article images and facts) can be freely used under Attribution-ShareAlike license, unless stated otherwise. Cite this article:
Harold Widom Facts for Kids. Kiddle Encyclopedia.