Kids Encyclopedia Facts
Not to be confused with Hartford Female Seminary.

Hartford Seminary is a non-denominational theological college in Hartford, Connecticut.

Hartford Seminary's origins date back to 1833 when the Pastoral Union of Connecticut was formed to train Congregational ministers. The next year the Theological Institute of Connecticut was founded at East Windsor Hill, Connecticut. The institution moved to Hartford in 1865 and officially took the name Hartford Theological Seminary in 1885. The Bible Normal College affiliated with the seminary in 1902 and changed its name to Hartford School of Religious Pedagogy. The Kennedy School of Missions became another affiliated activity, originally organized by the Seminary as a separate organization in 1911. In 1913, these three endeavors were combined. In 1961, the entities were legally merged and adopted the new name Hartford Seminary Foundation, which was used until 1981, when the current name came into use.

When the seminary moved to Hartford in 1865, it was at first located in the area now occupied by buildings of the Wadsworth Atheneum. In the 1910s, it planned a dedicated new campus on Hartford's west side, south of Elizabeth Street. Construction was delayed by World War I, and a handsome campus of Collegiate Gothic Revival buildings was constructed in the 1920s. Surviving elements of this construction phase were used by the seminary until 1981, and currently constitute the campus of the University of Connecticut School of Law. The present main seminary building, designed by architect Richard Meier, was completed in 1981, replacing several buildings demolished from the initial building phase. The seminary also continues to occupy several adjacent buildings that have historically been part of its campus. These, as well as the law school, were listed on the National Register of Historic Places in 1982, primarily for their architecture. 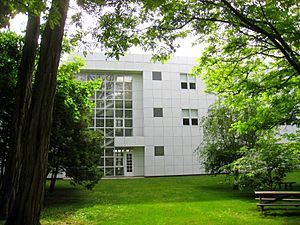 Hartford Seminary is centered on two academic centers: the Hartford Institute for Religion Research and the Duncan Black Macdonald Center for the Study of Islam and Christian-Muslim Relations. The seminary offers certificate programs and graduate degrees, including the only accredited Islamic chaplaincy programs.

Hartford Seminary has been home to the academic journal The Muslim World since 1938. The journal was founded in 1911. 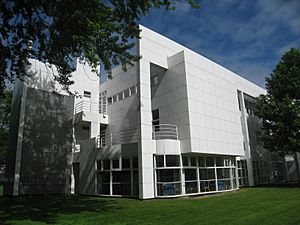 All content from Kiddle encyclopedia articles (including the article images and facts) can be freely used under Attribution-ShareAlike license, unless stated otherwise. Cite this article:
Hartford Seminary Facts for Kids. Kiddle Encyclopedia.