Harvard Yard, in Cambridge, Massachusetts, is the oldest part of the Harvard University campus, its historic center and modern crossroads. It contains most of the freshman dormitories, Harvard's most important libraries, Memorial Church, several classroom and departmental buildings, and the offices of senior University officials including the President of Harvard University.

The Yard is a grassy area of 22.4 acres (9.1 ha) bounded principally by Massachusetts Avenue, Cambridge Street, Broadway, and Quincy Street. Its perimeter fencing – principally iron, with some stretches of brick – has twenty-seven gates. 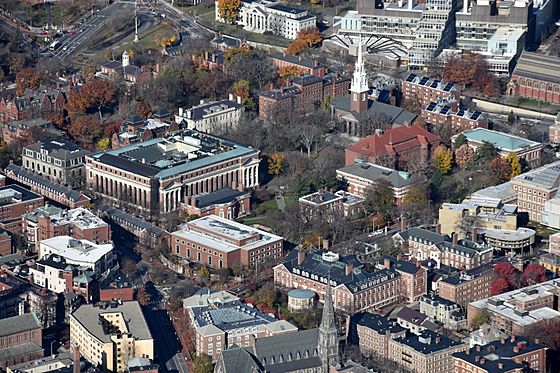 The western third of Harvard Yard, which opens onto Peabody Street (often mistaken for nearby Massachusetts Avenue) at Johnston Gate and abuts the center of Harvard Square to the south, is known as the Old Yard. Most of the freshman dormitories cluster around the Old Yard, including Massachusetts Hall (1720), Harvard's oldest building and the second-oldest academic building in the United States. Massachusetts Hall also houses the offices of the President of Harvard University.

The original Harvard Hall in the Old Yard housed the College library, including the books donated by John Harvard—​all but one of which were destroyed when the building burned in 1764. Rebuilt in 1766, the current Harvard Hall now houses classrooms.

Across the Old Yard from Johnston Gate is University Hall (1815), whose white-granite facade was the first to challenge the red-brick Georgian style until then ascendant; between its twin west staircases stands the John Harvard statue. University Hall contains major administrative offices, including those of the Dean of the Faculty of Arts and Sciences and the Dean of Harvard College.

Libraries in the Yard are Widener Library, its connected Pusey Library annex, Houghton Library for rare books and manuscripts, and Lamont Library, the main undergraduate library. Classroom and departmental buildings include Emerson Hall, Sever Hall, Robinson Hall, and Boylston Hall. The Harvard Bixi, a Chinese stele with inscribed text, is located near Widener.

Nestled among Mower, Hollis, Lionel, and Stoughton Halls is Holden Chapel, home of the Holden Choirs. Nearby is Phillips Brooks House, dedicated to student service to the community.

Administrative buildings in the Yard include the aforementioned University Hall and Massachusetts Hall; Loeb House, on the east side of the Yard; and Wadsworth House, on the south side. Loeb House is the home of Harvard's governing bodies: the Harvard Corporation and the Board of Overseers. Wadsworth House houses the Harvard University Librarian and the Office of the University Marshal, among others. Lehman Hall, at the southwestern corner of the Yard, provides administrative services for students who live off-campus.

All content from Kiddle encyclopedia articles (including the article images and facts) can be freely used under Attribution-ShareAlike license, unless stated otherwise. Cite this article:
Harvard Yard Facts for Kids. Kiddle Encyclopedia.