The Hastings Miniature Railway is a 10 1⁄4 in (260 mm) gauge miniature railway located on the seafront at Hastings, a seaside resort, town, and ancient cinque port, in East Sussex, England. Opened in 1948, it remains a popular tourist attraction. The line was re-opened in the summer of 2011 after a period of reconstruction and restoration, which coincided with a forced closure of the eastern part of the line, to facilitate building work on a new art gallery adjacent to the railway.

The railway entrepreneur Captain J.E.P. Howey, who built and owned the Romney, Hythe and Dymchurch Railway, had a great interest in miniature railway locomotives generally and acquired several locomotives of assorted gauges. One was a 10 1⁄4 in (260 mm) gauge model Great Western Railway pannier tank which Howey had rebuilt as an 0-6-0 tender locomotive named 'Firefly'. He also acquired a scale model Royal Scot engine of the same gauge. Although these engines were of too narrow a gauge for his railway, they did briefly operate after the second world war on a short length of track re-gauged for the purpose, near New Romney. They also operated (particularly Firefly) near Dymchurch, on a section of 10 1⁄4 in (260 mm) gauge track established alongside the main 15 in (381 mm) gauge running lines just before the outbreak of war, and continuing there until 1947. They were then relocated to St Leonards-on-Sea where Howey operated a small miniature railway for less than a year. Local complaints led to the line being relocated to Hastings and sold to Ian Allan and Jim Hughes, which was the beginning of the Hastings Miniature Railway, opening in 1948. 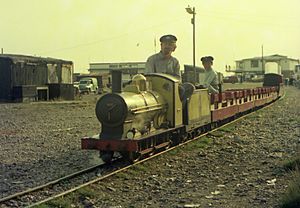 The railway's headquarters and engine sheds were constructed in 1948 at Rock-a-Nore, an urban area of old Hastings, dominated by the fishing industry, and the line ran from here along the beach (known locally as 'The Stade') to a railway station near the lifeboat station. This station has variously been named East Hastings Station, East Beach Station, and East Beach Street Station. For a while in the 1950s (possibly into the 1960s) scale model buses were operated alongside the station in a similar manner to the Kerr's Miniature Railway today.

In 1959 the line was extended to a new terminus at Marine Parade, provided with a single-platform station and run-round loop, and taking the full extent of the line to a little over 600 yards. The original station, now at the centre of the line, was retained, and provided passing facilities for two trains travelling in opposite directions. Rock-a-Nore station had one platform, a waiting shelter, a water-tower, a double-road engine shed, and a three-road carriage shed, including the main running line which passed through this shed, but was also available for storage of rolling stock at night. A second platform was later provided (by the addition of a concrete island between the main platform and the run-round loop), and a turntable was installed around 1960, having previously been sited at East Hastings.

The line was operated by scale model steam locomotives, particularly 'Firefly', the engine with the most celebrated and long-lived association with the railway. Diesel locomotives later operated, of which the most well-known was 'Uncle Jim', operating from 1968 to 1989. Through the bulk of this period, these two locomotives provided the regular service, and it is 'Firefly' and 'Uncle Jim' who were iconically depicted on the railway's advertising hoarding at Marine Parade.

In 1984 the railway changed ownership and from that point onwards only diesel locomotives were used.

There have been occasional visiting locomotives on the railway. Victoria, a scale LMS Jubilee Class 4-6-0, operated trains on the railway in 1978 for just one weekend, on the occasion of the naming of the diesel locomotive 'Uncle Jim' (see above).

During the 1980s there was a decline in the railway's fortunes and operations. Sidings at Rock-a-Nore were lifted or allowed to become overgrown, and facilities became shabby. In 1992 the owner removed most final traces of the now disused East Beach Station (a single platform remains on the landward side of the running line) and removed the passing loop at this location, bringing an end to the possibility of two-train operation. The remaining locomotives were sold, and a new steam-outline diesel-powered locomotive (Swee' Pea) was purchased from the Alan Keef engineering company in Herefordshire.

In 2008 the railway's old passenger carriages (still in regular use) were repainted in a standard livery (they had previously been painted assorted colours since the late 1980s) and a new railway logo was applied. Eleven passenger carriages were then available - seven in the main articulated set, and four spare vehicles. The locomotive Swee' Pea was rebuilt to a less angular design.

In January 2010 the railway changed ownership and a new lease was granted to the railway on the condition that vast changes and investments were made.

In August 2010 the railway had an official re-opening after extensive rebuilding and restoration work. Two new locomotives were added to the fleet, and construction began on a fourth engine, to enter service in 2011. Swee' Pea was repainted in a black livery, and the carriages were rebuilt, with new bodies on the original underframes. Two full rakes of carriages are now provided, and the railway has resumed the operation of a two-train service at busy periods. To facilitate this, the passing loop has been restored at East Beach Station, and in 2010 two trains passed each other for the first time in twenty-one years.

In early 2011 there has been extensive work at Rock-a-Nore Station, which has seen a vast improvement in presentation, and the restoration of much of the historical layout, features, and facilities of this station. The turntable has been reinstated, and the original two-road engine shed brought back into use. A new engineering workshop has been constructed and the platform lengthened.

In early 2012 similar work was undertaken at Marine Parade Station, with all track relaid and renewed, and a new locomotive-stabling short siding installed.

In April 2012 the railway was presented with the Railway of the Year award by the Ten and a Quarter Inch Gauge Railway Society.

The current numbering system of the locomotive fleet was introduced in 2011 by the railway's new owners, Dan Radcliffe and David Miller. The numbers represent the sequence in which the current locomotives arrived (or arrived back) at Hastings, and not their chronological age, nor their time in service at Hastings.

All content from Kiddle encyclopedia articles (including the article images and facts) can be freely used under Attribution-ShareAlike license, unless stated otherwise. Cite this article:
Hastings Miniature Railway Facts for Kids. Kiddle Encyclopedia.