The province is one of the main industries is mining, with manganese, gold and uranium being found in the region. The uranium-bearing mineral Francevillite takes its name from the main city. 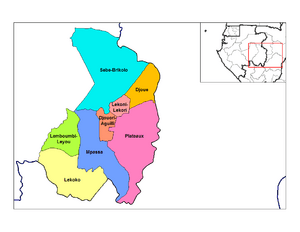 There are eight departments:

All content from Kiddle encyclopedia articles (including the article images and facts) can be freely used under Attribution-ShareAlike license, unless stated otherwise. Cite this article:
Haut-Ogooué Facts for Kids. Kiddle Encyclopedia.