Hebe speciosa is a species of flowering plant in the plantain family known by the common names New Zealand hebe, showy hebe, showy-speedwell, and the Maori names Titirangi and Napuka. It is native to New Zealand but it can be found in other parts of the world where it is grown as an ornamental for its showy flowers. 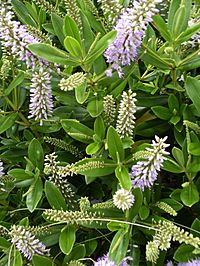 This hebe is a shrub reaching heights between one and two meters. Its evergreen leaves are dark green, shiny, and quite thick, usually measuring 2 to 5 centimeters long. The inflorescence is up to 8 centimeters long and densely packed with pale pink to bright magenta flowers. Each flower is just under a centimeter wide and has a short throat spreading into a four-lobed corolla. Two very long stamens protrude from the throat of each flower, giving the inflorescence a whiskery look. The fruit is a capsule containing flat, smooth seeds.

Hebe speciosa, its many cultivars and hybrids are very popular garden plants in area with suitably mild temperate climates. Many can even be grown outdoors in sheltered parts of southern Britain. They appeal because of their lush evergreen foliage, showy flowerheads, long blooming season and ease of cultivation.

As of December 2013, the New Zealand Landcare Research considers that all forms of Hebe and Parahebe should be returned to the genus in which they were originally classified: Veronica. This appeared to be gaining general acceptance but recent research is indicating that divisions such as Hebe, Parahebe, Chionohebe, Leonohebe and Derwentia should be retained.

Hebe speciosa is included in the Tasmanian Fire Service's list of low flammability plants, indicating that it is suitable for growing within a building protection zone.

All content from Kiddle encyclopedia articles (including the article images and facts) can be freely used under Attribution-ShareAlike license, unless stated otherwise. Cite this article:
Hebe speciosa Facts for Kids. Kiddle Encyclopedia.