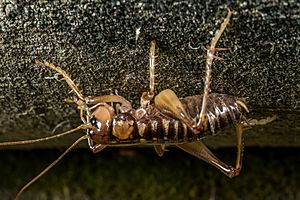 Hemiandrus maia at night in Dunedin

Hemiandrus maia, the Otago ground wētā, is a species of ground wētā endemic to New Zealand. Being a ground weta, they are often found in burrows in the ground during the daytime (as they are also nocturnal). The species is occurs on the South Island and is classified as "not threatened". This species of wētā is unusual for an insect in that the female looks after her eggs and nymphs, this is known as maternal care.

Hemiandrus maia was first described in 2013, but had been referred to in previous publications by an informal (tag) name (Hemiandrus 'evansae'). The species name comes from the Greek name Maia, the eldest of the Pleiades (in Greek mythology the seven daughters of Pleione and Atlas), meaning ‘mother’ or ‘good mother’. This name is given to this species to reflect the maternal care exhibited.

Hemiandrus maia are endemic to the South Island of New Zealand. Because they are a ground weta, they are often found in burrows in the ground during the day, as they are a nocturnal species. During the night however, they are quite active on the ground, but are also found in vegetation.

The New Zealand Department of Conservation classified this species as "not threatened" in 2014.

Hemiandrus maia come out of their burrows on average once every three nights. The females share burrows and care for eggs and nymphs.

All content from Kiddle encyclopedia articles (including the article images and facts) can be freely used under Attribution-ShareAlike license, unless stated otherwise. Cite this article:
Otago ground wētā Facts for Kids. Kiddle Encyclopedia.