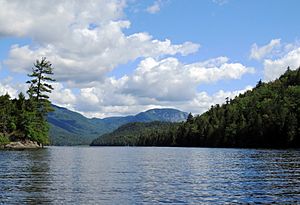 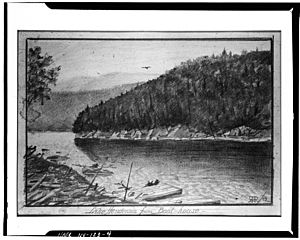 Henderson Lake is a lake in the Adirondack mountains in the town of Newcomb, Essex County, New York in the United States. It was named in 1826 after David Henderson, one of the founders of the Elba Iron Works near Lake Placid, New York, and of the Upper Works at Tahawus, New York. The lake is mainly cited by cartographers as the place where the Hudson River as named officially begins, flowing out of the eastern end and outlet of the lake, although the source of the river is usually traced up Indian Pass Brook and other watercourses to Lake Tear of the Clouds. 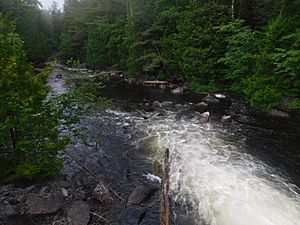 The Hudson River flowing out of Henderson Lake in Tahawus

All content from Kiddle encyclopedia articles (including the article images and facts) can be freely used under Attribution-ShareAlike license, unless stated otherwise. Cite this article:
Henderson Lake (New York) Facts for Kids. Kiddle Encyclopedia.