Hermitage of Braid facts for kids 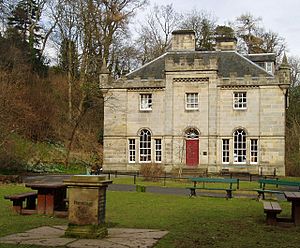 Hermitage of Braid, the 18th-century house which gives the area its name

The Braid estate was the property of the de Brad family one of whom, Henri de Brad, was Sheriff of Edinburgh in the 12th century. A castle stood on the estate until the 18th century. In the 18th century the estate was purchased by the lawyer Charles Gordon of Cluny (died 1814), who commissioned the present house, known as Hermitage of Braid or Hermitage House, which stands on the north side of the Braid Burn. The house was built in 1785 and the architect was Robert Burn: the castellated Gothic style may have been influenced by the work of Robert Adam. Charles Gordon's son was the soldier and MP Colonel John Gordon (c.1776–1858). The house is a category A listed building.

In 1937 the then owner of the Hermitage, John McDougal, gifted the land to the city for use as a public park. A pillar in the grounds records the gift, and the subsequent opening of the park on 10 June 1938 by Lord Provost Sir Louis Gumley. The house is now a visitor centre for the nature reserve, and offices of the City of Edinburgh Council's Countryside Natural Heritage Service.

All content from Kiddle encyclopedia articles (including the article images and facts) can be freely used under Attribution-ShareAlike license, unless stated otherwise. Cite this article:
Hermitage of Braid Facts for Kids. Kiddle Encyclopedia.