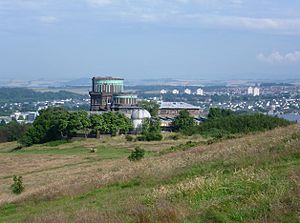 There is an ancient hill fort on the summit area of the hill which, along with the circular foundations of some nearby houses, is protected as a Scheduled Ancient Monument.

Blackford Hill was bought by the Edinburgh Corporation in 1884, and the adjacent Hermitage of Braid estate was gifted to the city of Edinburgh in 1938, by its final owner, John McDougal. The gift allowed the Hermitage to be used as "a Public Park or Recreation Ground for the benefit of the citizens." The City of Edinburgh Council retains ownership of the park and is primarily responsible for its maintenance. This is done primarily through the ranger service, with the assistance of other council teams such as Task Force and Forestry Unit.

The hill has clear views over Edinburgh to the north, and the Pentland Hills to the south. It is popular with walkers, as it has many well established paths, as well as runners and other leisure users. There is a wide range of flora and fauna within a green belt area of Edinburgh, making it an important target for conservation. Around half of the area is unimproved grassland. 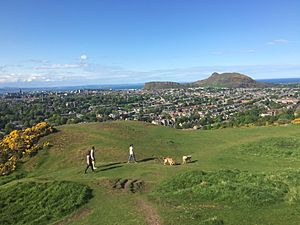 The Royal Observatory, Edinburgh is located near the summit. The hilltop also features a police radio transmitter and a meteorological station. Craigmillar Park golf course is situated to the east of Blackford Hill, near the observatory, and the Midmar allotments and Blackford Pond are adjacent to the hill on the north side.

Midmar paddock is adjacent to the hill. Owned by the A. J. Laing Trust proposals to develop it have attracted controversy.

There are around 12 hectares (30 acres) of mature woodland on the hill, as well as some new trees on a reclaimed landfill mound planted in the late 1990s as part of the Millennium Forest Community Woodland.

Blackford Hill is formed from Lower Devonian volcanic rocks, lying between Upper Devonian sandstone, the northernmost extent of those found in the Pentland Hills to the South. Geologically the hill is different from the Carboniferous volcanic plugs and intrusions which form the remainder of Edinburgh's hills, with the exception of the nearby Braid Hills.

Of geological and historical interest is Agassiz Rock, a quarry-like feature, situated close to the hill, which was the first evidence of the action of glaciers to be found in Scotland, recognised by the Swiss geologist Louis Agassiz. It is a Site of Special Scientific Interest.

The Braid Burn is the principal watercourse, flowing for some 3 kilometres (1.9 mi) through the nature reserve. It is a small river, typically around 5 metres (16 ft) wide by 20 centimetres (7.9 in) deep, although subject to significant variation. At this location it is approximately half way along its 32 kilometres (20 mi) course from a spring in the Pentland Hills, to its mouth at Portobello. There is a tunnel around 120 metres (390 ft) long in the vicinity of the House.

Blackford Pond lies to the north of the hill, and is popular with families.

All content from Kiddle encyclopedia articles (including the article images and facts) can be freely used under Attribution-ShareAlike license, unless stated otherwise. Cite this article:
Blackford Hill Facts for Kids. Kiddle Encyclopedia.