Blackford Pond is a small, artificial pond in the Blackford region of Edinburgh.

The pond was created during the Victorian Era in a glacial hollow in the Blackford region of Edinburgh. According to Ordnance Survey maps, it was created between 1800 and 1900 in an ice-scoured hollow. The pond measures 225 by 60 metres (738 by 197 ft), and has an island originally 8 by 40 metres (26 by 131 ft) in size, but the island had been eroded to a quarter of this size until it was restored in 2010.

The water is eutrophic due to run-off from the neighbouring allotments, as well as remains of bread given to birds and the faeces of the birds. This can lead to algal blooms that deplete the level of oxygen in the pond. There are no visible inflows, but there is a drain at the eastern end which keeps the water level constant.

It has significant populations of birds, including swans and ducks. There is a small bird house on the artificial island in the middle of the pond, which attracts birds all year round. The pond used to be used by the University of Edinburgh to demonstrate the use of mark and recapture to count fish. 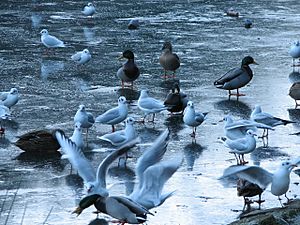 Birds on the frozen pond

The pond is popular with families, due to its accessibility and the presence of a play area. The pond is next to Blackford Hill, and is easily accessed from both ends.

The pond was used by the Waverley Curling Club, which formed in 1848 from members of the Merchiston Curling Club. Photographs show curling was played on the pond well into the 20th century. The pond often freezes over sufficiently to support the weight of birds, but does not freeze solidly enough to safely support a human.

All content from Kiddle encyclopedia articles (including the article images and facts) can be freely used under Attribution-ShareAlike license, unless stated otherwise. Cite this article:
Blackford Pond Facts for Kids. Kiddle Encyclopedia.