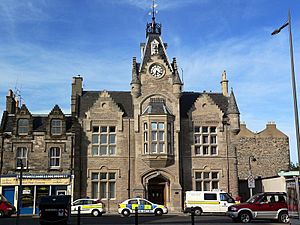 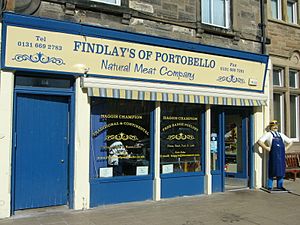 Butcher's shop in the High Street

Portobello is a coastal suburb of Edinburgh in eastern central Scotland. It lies 3 miles (5 km) east of the city centre, facing the Firth of Forth, between the suburbs of Joppa and Craigentinny. Although historically it was a town in its own right, it is officially a residential suburb of Edinburgh. The promenade fronts onto a wide sandy beach.

Prior to its current revival, its peak as a resort was probably in the late 19th century, and it was in slow decline throughout the 20th century. Its attraction was mainly limited to the inhabitants of Edinburgh, but some claim also to Glaswegians, particularly when the Glasgow Fair "trade holiday" signalled the start of a two-week holiday for the west of Scotland. By the 1960s, it had become an area of amusement arcades and some permanent funfair attractions. From the 1980s onwards, these also gradually disappeared, and by the end of the 20th century the Promenade had almost no attractions specific to its seaside location, although the Tower Amusements arcade remains in business.

The 21st century has seen a visible change along the Promenade: the kayaking and sailing clubs hold annual skiff races, beach volley ball is well established outside Portobello swimming baths, and the beach is home to occasional art installations by arts group 'Big Things on the Beach', while the now iconic 'Cressida' octopus sculpture is a permanent feature that is submerged every high tide. Amongst other examples of the changing nature of Portobello are August's Big Beach Busk and Portobello Village Fair, as well as the monthly Portobello Market in Rosefield Park. Most recently, in October 2016, Portobello became the first urban community in Scotland to register a Community Right to Buy after the 2016 expansion of land reform to cover urban areas too.

The area was originally known as Figgate Muir, an expanse of moorland through which the Figgate Burn flowed from Duddingston Loch to the sea, with a broad sandy beach on the Firth of Forth. The name Figgate was thought to come from the Saxon term for "cow's ditch". However, the land was used as pasture for cattle by the monks of Holyrood Abbey and the name is more likely to mean "cow road" as in Cowgate in Edinburgh. In 1296, William Wallace mustered forces on the moor in a campaign that led to the Battle of Dunbar, and in 1650 it was the supposed scene of a secret meeting between Oliver Cromwell and Scottish leaders. A report from 1661 describes a race in which twelve browster-wives ran from the Burn (recorded as the Thicket Burn) to the top of Arthur's Seat.

By the 18th century, it had become a haunt of seamen and smugglers. A cottage was built in 1742 on what is now the High Street (close to the junction with what is now Brighton Place) by a seaman by the name of George Hamilton, who had served under Admiral Edward Vernon during the 1739 capture of Porto Bello, Panama, meaning literally "beautiful port or harbour", and who named the cottage Portobello Hut in honour of that victory. By 1753, there were other houses around it, and the cottage itself remained intact until 1851, becoming a hostelry for walkers and becoming known as the Shepherd's Ha'.

In 1763, the lands known as the Figgate Whins were sold by Lord Milton to Baron Mure for about £1,500, and afterwards feued out by the latter to a Mr William Jameson or Jamieson at the rate of £3 per acre. Jameson discovered a valuable bed of clay near the burn, and built a brick and tile works beside the stream. He later built an earthenware pottery factory, and the local population grew so that Portobello became a thriving village. Land values subsequently rose, and by the beginning of the 19th century some parts had been sold at a yearly feu-duty of £40 per annum per acre.

Portobello Sands were used at that time by the Edinburgh Light Horse for drill practice. Walter Scott was their quartermaster, and in 1802 while riding in a charge he was kicked by a horse and confined to his lodgings for three days. While recovering, he finished The Lay of the Last Minstrel. The Scots Magazine in 1806. He noted that the lands were "a perfect waste covered almost entirely with whins or furze". Portobello developed into a fashionable bathing resort, and in 1807 new salt-water baths were erected at a cost of £5,000. In 1822, the Visit of King George IV to Scotland, organised by Scott, included a review of troops and Highlanders held on the sands, with spectators crowding the sand dunes. 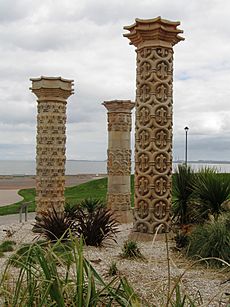 Three pillars in Coade stone from a local garden, re-erected on Portobello Promenade

During the 19th century, Portobello also became an industrial town, manufacturing bricks (the "Portobello brick"), glass, lead, paper, pottery, soap, and mustard. Joppa to the east was important in the production of salt.

In 1833, the town was made a burgh, then in 1896 it was incorporated into Edinburgh by Act of Parliament. A formidable red-brick power station (designed by Ebenezer James MacRae) was built in 1934 at the west end of the beach and operated until 1977. It was demolished in the following 18 months.

Between 1846 and 1964, a railway station provided ready access for visitors to the resort, whose facilities came to include a large open-air heated swimming pool, where the actor Sean Connery once worked as a lifeguard. It made use of the power station's spare heat. The pool was closed in 1979. There was also a lido (now demolished) and a permanent funfair which closed in 2007. In 1901, Portobello Baths were opened on The Promenade overlooking the beach. The baths, now known as Portobello Swim Centre, are still open and are home to one of only three remaining operational Turkish baths in Scotland. (Other non-functioning baths survive.) They are open to the public.

Portobello Pier was a pleasure pier situated near the end of Bath Street. It operated from 23 May 1871 until the start of World War I. The pier was 1,250 feet long and had a restaurant and observatory at the end. It cost £7,000 to build and was designed by Sir Thomas Bouch, who was infamously linked to the Tay Bridge disaster. In a similar ending, the iron supports rusted away and the pier was demolished as uneconomic to repair in 1917. The Promenade/Esplanade was created between the town and the beach in 1876.

More short-lived, the Edinburgh Marine Gardens were built north of Kings Road in 1908–9. This included an open-air theatre, an industrial hall, a ballroom (later used as a skating rink), a scenic railway, a "rustic mill and water-wheel" and a speedway track. It fell out of use in World War I and never recovered, giving it a mere six years of full use. The speedway/motor cycle track remained in operation until 1939 and the outbreak of World War II. The entire site was cleared in 1966 and is now home to the Lothian Buses Marine bus depot and various car showrooms.

The building of Portobello Lido in 1933, and of a pool equipped with the first wave-making machine in Scotland three years later, helped to revive the area for a while.

Portobello is served by Lothian Buses and East Coast Buses, which provide eleven services to the area, continuing towards Joppa and Eastfield to Musselburgh, Port Seton, Tranent or North Berwick, down Brighton Place to Fort Kinnaird or Royal Infirmary, and from Kings Road to Craigentinny. The former electric tramways operated by Edinburgh Corporation Transport Department were replaced by diesel buses in November 1956.

For two weeks in 2007 there was an experimental hovercraft service to Kirkcaldy in Fife. Stagecoach was interested in running a regular service, but the local authority refused planning permission for the infrastructure. Stagecoach planned to use a terminal to be built in Leith using public funds, which failed to materialise. 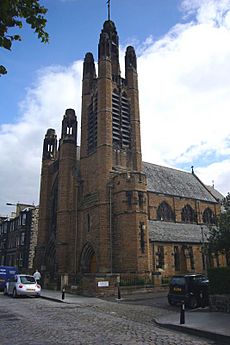 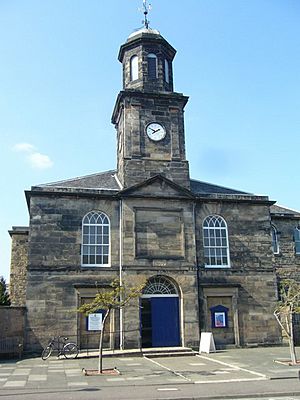 The building was designed by William Sibbald and the foundation stone was laid on 27 October 1808 with the church opening for worship in 1810. It originally had the status of Chapel of Ease for Duddingston Parish Church to the west. In May 1834 the General Assembly of the Church of Scotland gave it the status of a quoad sacra church. It received full independent parish status in 1861.

The church hall, built in 1964, stands unceremoneously on the former graveyard, but several stones survive, for instance in the narrow gap behind the back of the hall and the boundary.

In 2017 the church was sold by the Church of Scotland to the local community and reopened in 2018 as Bellfield community centre.

All content from Kiddle encyclopedia articles (including the article images and facts) can be freely used under Attribution-ShareAlike license, unless stated otherwise. Cite this article:
Portobello, Edinburgh Facts for Kids. Kiddle Encyclopedia.