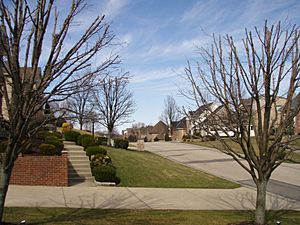 The Hickory Heights neighborhood has an approximate total area of 5 square miles (13 km2), all of it land.

Hickory Heights has a rich, unexpected and truly interesting history. In approximately 1770 General George Washington (later to become first President of the United States) acquired a 2,813-acre (11.38 km2) parcel of land in Western Pennsylvania known as Millers Run. This property includes Hickory Heights as well as lands farther south. This property was given to Washington by his neighbor John Posey in exchange for the forgiveness of debt. George Washington was essentially an absentee landlord who treated the property in the wild western frontier of PA as an investment. In September 1784 he traveled to Miller's Run to survey his holdings, and discovered a population of Scotch-Irish squatters residing on his land. Over the next few years Washington methodically went about initiating legal proceedings to evict them. He eventually won a judgment against the group. In 1796 George Washington attempted to sell the property, but the sale collapsed when the purchasing agent defaulted on the mortgage. Washington then held onto the property until his death. Because of the extended legal proceedings, it is very clear that this property consumed quite a bit of Washington's time. It is clearly documented that he visited the property at least once, but he was not active in the regular maintenance of the area.

All content from Kiddle encyclopedia articles (including the article images and facts) can be freely used under Attribution-ShareAlike license, unless stated otherwise. Cite this article:
Hickory Heights, Pennsylvania Facts for Kids. Kiddle Encyclopedia.