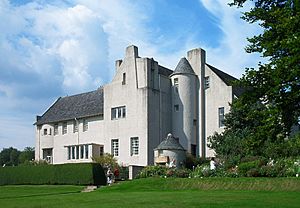 Hill House in Helensburgh, Scotland, is one of Charles and Margaret Macdonald Mackintosh's most famous works, probably second only to the (now destroyed) Glasgow School of Art. The house is a prominent example of the Modern Style (British Art Nouveau style). It was designed and built for the publisher Walter Blackie in 1902–1904.

In addition to the house, Mackintosh designed most of the interior, furniture and fittings. Mackintosh's attention to detail extended to prescribing the colour of cut flowers that the Blackies might place on a table in the living room.

In 1982 the house was donated to the National Trust for Scotland which maintains it and opens it to visitors.

Helensburgh, to the west of Glasgow was settled by businessmen whose wealth came from the industrialised city. In 1902, Walter Blackie of the publishers Blackie and Son purchased a plot on which to build a new home. At the suggestion of Talwin Morris, Mackintosh was appointed to design and build Hill House. Blackie was surprised at the youthfulness of the architect, but after visiting other houses Mackintosh had designed, was convinced he was the right person to build the house. Blackie stipulated no bricks and plaster or wood beam construction, and no red-tiled roof, as traditional in the west of Scotland. Instead, Blackie asked for grey rough cast walls, and a slate roof; and that architectural effects ought to be secured by the massing of the parts rather than ornamentation. The requirements and non-traditional taste of the client allowed Mackintosh full rein for his design ideas.

Before creating an elevation drawing or floor plan, Mackintosh spent some time in the Blackies' home to observe their everyday life. By analysing the family’s habits Mackintosh could design every aspect of the house according to the needs of each user. He believed functional issues should be solved before allowing the design to evolve.

The house is reportedly haunted and a staff member described a tall slender figure dressed in black with a long black cape that appeared from Mr Blackie's Dressing Room. Upon entering the White Bedroom the figure vanished.

The uniform and grayish exterior treatment of the building blends in with an overcast sky. The completely asymmetrical construction forms different roof levels and shapes, and also records Mackintosh’s appreciation for A. W. N. Pugin’s picturesque utility where the exterior contour evolves from the interior planning. The minimum decoration, heavy walls, and rectangular and square windows express a strong, sober construction. The exterior qualities of the building are nearly the opposite of the warm, exotic, carefully decorated and smooth interior. Again, Mackintosh relates to Pugin’s theory by minimizing exterior decoration to emphasize the interior design: the transition from the outside world into a safe, fantastic inside space. Paint analysis of the harling on the exterior shows that it might have been left as an unpainted pale grey initially. 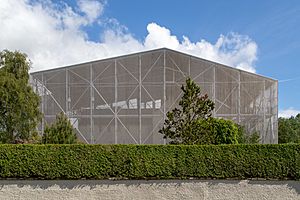 Mackintosh selected portland cement harl, then a newly introduced product, for the surface finish but this was found to be less durable than traditional lime harl and by 2017 it was discovered to be in a precarious condition, putting the integrity of the whole building at risk. As a temporary solution NTS has enclosed Hill House in a transparent porous "box", allowing some movement of air, so that the structure dries out gradually.

The mansion combined the Edwardian period’s traditional ‘femininity’ of an intimate, inside space, with the ‘masculinity’ of the exterior public world, both uncommonly used throughout the interior of the building. To Mackintosh, bringing the masculine aspects to the inside would break away from the over decorated, entirely feminine conventional interiors. This allowed him to convey different feelings and experiences depending on the purpose of each space. Mackintosh used different materials, colours and lighting, when necessary to perform a full experiential transition from one point to another. All in such an elegant and well planned manner, that with the absence of one the other would mar.

All content from Kiddle encyclopedia articles (including the article images and facts) can be freely used under Attribution-ShareAlike license, unless stated otherwise. Cite this article:
Hill House, Helensburgh Facts for Kids. Kiddle Encyclopedia.