Charles Rennie Mackintosh (7 June 1868 – 10 December 1928) was a Scottish architect, designer, watercolourist and sculptor. He was a designer in the Arts and Crafts movement and also the main exponent of Art Nouveau in the United Kingdom. He had a considerable influence on European design. He was born in Glasgow and he died in London. 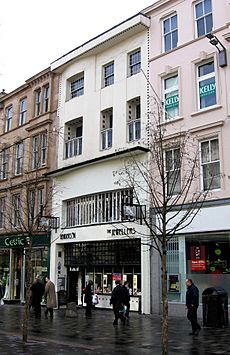 Charles Rennie Mackintosh was born at 70 Parson Street Glasgow on 7 June 1868 as the fourth out of eleven children and the second son to William Mackintosh and Margaret Mackintosh. The young Charles attended Reid's Public School and the Allan Glen's Institution. In 1890 Mackintosh was the second winner of the Alexander Thomson Travelling Studentship, set up for the "furtherance of the study of ancient classic architecture, with special reference to the principles illustrated in Mr. Thomson’s works." Upon his return, he resumed with the Honeyman and Keppie architectural practice where he commenced his first grand architectural project, the Glasgow Herald Building, in 1899. 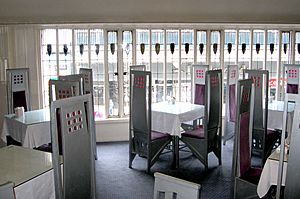 The Room de Luxe at The Willow Tearooms features furniture and interior design by Mackintosh and Margaret Macdonald.

He lived most of his life in the city of Glasgow. Located by the margins of the River Clyde, during the Industrial Revolution the city had one of the greatest production centres of heavy engineering and shipbuilding in the world. As the "Glowing City of the North" grew and prospered, a faster response to the high demand for consumer goods and arts was necessary. Industrialized, mass-produced items started to gain popularity. Along with the Industrial Revolution, Asian style and emerging modernist ideas also influenced Mackintosh's designs. 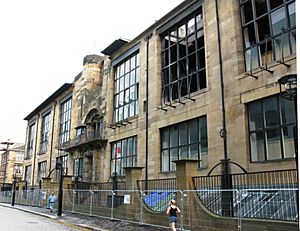 Mackintosh's designs gained in popularity in the decades following his death. His House for an Art Lover was finally built in Glasgow's Bellahouston Park in 1996, and the University of Glasgow (which owns the majority of his watercolour work) rebuilt the interiors of a terraced house Mackintosh had designed, and furnished it with his and Margaret's work (it is part of the University's Hunterian Museum). The Glasgow School of Art building (now renamed "The Mackintosh Building") is regularly cited by architectural critics as among the very finest buildings in the UK. The Charles Rennie Mackintosh Society tries to encourage a greater awareness of the work of Mackintosh as an important architect, artist and designer.

Charles Rennie Mackintosh was to be commemorated on a new series of banknotes issued by the Clydesdale Bank in 2009; his image appeared on the new issue of £100 notes.

All content from Kiddle encyclopedia articles (including the article images and facts) can be freely used under Attribution-ShareAlike license, unless stated otherwise. Cite this article:
Charles Rennie Mackintosh Facts for Kids. Kiddle Encyclopedia.