The Herald (Glasgow) facts for kids

The newspaper was founded by an Edinburgh-born printer called John Mennons in January 1783 as a weekly publication called the Glasgow Advertiser. Mennons' first edition had a global scoop: news of the treaties of Versailles, reached Mennons via the Lord Provost of Glasgow just as he was putting the paper together. War had ended with the American colonies, he revealed. The Herald, therefore, is as old as the United States of America, give or take an hour or two.

The story was, however, only carried on the back page. Mennons, using the larger of two fonts available to him, put it in the space reserved for late news.

In 1802, Mennons sold the newspaper to Benjamin Mathie and Dr James McNayr, former owner of the Glasgow Courier, which. along with the Mercury, was one of two papers Mennons had come to Glasgow to challenge. Mennons' son Thomas retained an interest in the company. The new owners changed the name to The Herald and Advertiser and Commercial Chronicle in 1803. In 1805 the name changed again, time to The Glasgow Herald when Thomas Mennons severed his ties to the paper.

From 1836 to 1964 The Herald was owned by George Outram & Co. becoming the first daily newspaper in Scotland in 1858. The company took its name from the paper's editor of 19 years, George Outram, an Edinburgh advocate best known in Glasgow for composing light verse. Outram was an early Scottish nationalist, a member of the National Association for the Vindication of Scottish Rights. The Herald, under Outram, argued that the promised privileges of the Treaty of Union had failed to materialise and demanded that, for example, that the heir to the British throne be called "Prince Royal of Scotland". "Any man calling himself a Scotsman should enrol in the National Association," said The Herald. 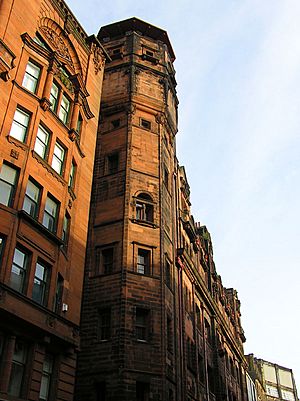 The Herald's former building in Glasgow

One of the most traumatic episodes in the history of The Herald was the battle for control and ownership of the paper in 1964. Millionaires Hugh Fraser and Roy Thomson, whose newspaper empire included The Herald's archrival, The Scotsman, fought for control of the title for 52 days. Sir Hugh Fraser was to win. The paper's then editor James Holburn was a 'disapproving onlooker' The Labour Party condemned the battle as 'big business at its worst'.

The newspaper changed its name to The Herald on 3 February 1992, dropping Glasgow from its title, but not its masthead. That same year the title was bought by Caledonia Newspaper Publishing & Glasgow. In 1996 was purchased by Scottish Television (later called the Scottish Media Group). As of 2013 the newspaper along with its related publications, the Evening Times and Sunday Herald, were owned by the Newsquest media group.

It is currently printed at Carmyle, just south east of Glasgow. The paper is published Monday to Saturday in Glasgow and as of 2017 it had an audited circulation of 28,900. The Herald's website is protected by a paywall. It is part of the Newsquest Scotland stable of sites, which have 41m page views a month.

The Herald in every edition declares that it does not endorse any political party. However, the newspaper backed a 'No' vote in the 2014 referendum on Scottish independence. The accompanying headline stated, "The Herald's view: we back staying within UK, but only if there's more far-reaching further devolution."

All content from Kiddle encyclopedia articles (including the article images and facts) can be freely used under Attribution-ShareAlike license, unless stated otherwise. Cite this article:
The Herald (Glasgow) Facts for Kids. Kiddle Encyclopedia.