Hippopotamuses are a group of even-toed ungulate mammals. They form the family Hippopotamidae. There are two living species of Hippopotamuses. 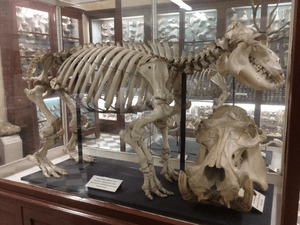 Hippopotamuses are large mammals, with short, stumpy legs, and barrel-shaped bodies. They have large heads, with broad mouths, and nostrils placed at the top of their snouts. Like pigs, they have four toes, but unlike pigs, all of the toes are used in walking. Hippopotamids are unguligrade, although, unlike most other such animals, they have no hooves, instead using a pad of tough connective tissue on each foot. Their stomachs have three chambers, but they are not true ruminants.

The living species are smooth-skinned and lack both sebaceous glands and sweat glands. The outer epidermis is relatively thin, so hippos dehydrate rapidly in dry environments.

Both the incisors and canines are large and tusk-like, although the canine tusks are by far the larger. The tusks grow throughout life. The postcanine teeth are large and complex, suited for chewing the plant matter that comprises their diets. 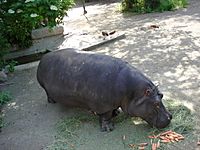 All content from Kiddle encyclopedia articles (including the article images and facts) can be freely used under Attribution-ShareAlike license, unless stated otherwise. Cite this article:
Hippopotamidae Facts for Kids. Kiddle Encyclopedia.