Holcomb Observatory and Planetarium is a part of Butler University in Indianapolis, Indiana.

In 1888, the university built its first observatory when the campus was located on the east side of Indianapolis. The observatory housed a 6-inch (150 mm) telescope that was purchased from the estate of Robert McKim of Madison, Indiana that year. The lens for the telescope was manufactured by Alvan Clark & Sons in 1883 and was originally part of McKim's personal observatory located near his home in Madison.

When the campus moved to the north side of Indianapolis in 1928, the old observatory on the Irvington campus was torn down. The telescope was reconditioned in the 1930s and remounted on the new campus, but sat unused until 1945. 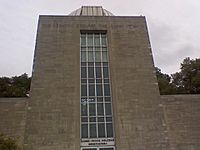 The inscription reads "The Heavens Declare The Glory Of God"

In 1953, benefactor James Irving Holcomb and his wife gave $325,000 for the construction of an observatory as the centennial gift to the university. In October 1954, a 38-inch (970 mm) reflecting telescope was installed by J. W. Fecker, Inc. The telescope was, and still is, the largest in the state of Indiana. The observatory was built on a hill on the north end of the Butler University campus.

The observatory's wooden dome was replaced with its current aluminum dome in the early 1980s. The telescope itself was first refurbished over several years beginning in 1995 by AB Engineering of Fort Wayne, Indiana at a cost of approximately $120,000.

Since then two major upgrades to the observatory have taken place. First, in 2015, the telescope underwent a $425,000 upgrade by Astronomical Consultants and Equipment to greatly improve its optics, operation, and research ability. This upgrade changed the optics of the telescope from an F16 to an F6.3. This change in focal ratio in combination with a new FLI CCD camera increased the effective imaging area of the telescope by a factor of 10, giving the imager a field of view of 18 arcminutes. The telescope can be used remotely by observers from anywhere in the world, alleviating the need to be on campus when conducting research. Research conducted using the Holcomb telescope includes asteroids, eclipsing variable stars, exoplanets, and long period variables in globular star clusters. Second, in 2018 and 2019 the planetarium underwent a complete overhaul of over $200,000 with the help of Indianapolis-based Bowen Technovation and is now a fully digital, immersive fulldome theater. The planetarium had its old Spitz AP3 star projector replaced with a fulldome digital projector in 2018. The new Digitarium Kappa projector projects more than 4 million pixels onto the dome of the planetarium. It can show the sky as it was millions of years into the past and future. The new Kappa projector also allows for flight to the Moon and planets, and through and out of the Milky Way galaxy. In addition to the digital projector the original wooden benches were replaced with comfortable theater style seating. Also 5.1 surround sound and cove lighting were installed in the planetarium. These upgrades have greatly enhanced the visitor experience.

Although the equipment has been upgraded, the observatory building retains its 1950s charm. The lobby has a terrazzo floor with inset zodiac symbols, a star burst chandelier, and tall frosted windows. The telescope retains its classic 1950s look, and riding piggyback on the main telescope is Butler University's first telescope dating back to the 1880s.

All content from Kiddle encyclopedia articles (including the article images and facts) can be freely used under Attribution-ShareAlike license, unless stated otherwise. Cite this article:
Holcomb Observatory and Planetarium Facts for Kids. Kiddle Encyclopedia.