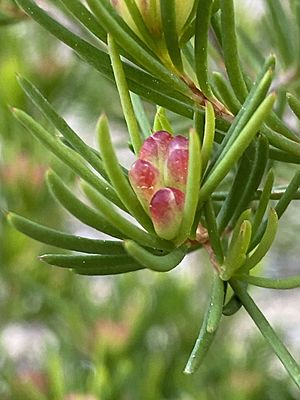 Homoranthus montanus is a plant in the myrtle family Myrtaceae and is endemic to a small area in southern Queensland. It has narrow leaves and up to one to six small tubular, cream-coloured flowers arranged in leaf axils near the ends of the branchlets. As the flowers age, they turn red.

An erect shrub growing to 1.2 m (4 ft) tall. The leaves are 0.8 mm (0.03 in) thick. Flowers and fruits sporadically throughout the year, mostly October to November.

Homoranthus montanus was first formally described in 1991 by Lyndley Craven and S.R Jones and the description was published in Australian Systematic Botany. The specific epithet (montanus) is a Latin word meaning "of mountains".

Restricted to Ballandean and Mount Jibbinbar Queensland. Grows on shallow sandy soils in woodland and heath on and around granite outcrops.

All content from Kiddle encyclopedia articles (including the article images and facts) can be freely used under Attribution-ShareAlike license, unless stated otherwise. Cite this article:
Homoranthus montanus Facts for Kids. Kiddle Encyclopedia.