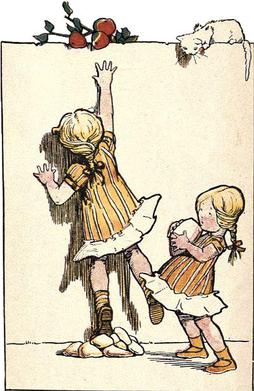 Honor Charlotte Appleton (1879–1951) was a British illustrator of children's books, including The Children's Alice. She had a delicate watercolour style, influenced by Kate Greenaway and others.

She was born in Brighton, on the south coast of England, on 4 February 1879 and lived in nearby Hove most of her life. She studied art at the Kensington School, Frank Calderon's School of Animal Painting and the Royal Academy of Arts.

Appleton illustrated more than 150 books in the course of her career, starting first with children's stories and later moving to literary classics. They included the fairytales of Charles Perrault and Hans Christian Andersen, William Blake's Songs of Innocence and a retold version of Alice's Adventures in Wonderland, The Children's Alice.

Her watercolours were exhibited at the Royal Academy, and there was a memorial exhibition of her work at the Hove Library in 1952.

All content from Kiddle encyclopedia articles (including the article images and facts) can be freely used under Attribution-ShareAlike license, unless stated otherwise. Cite this article:
Honor C. Appleton Facts for Kids. Kiddle Encyclopedia.