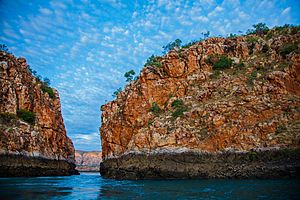 The Horizontal Falls, or Horizontal Waterfalls, nicknamed the "Horries" and known as Garaanngaddim to the local Indigenous people, are an unusual natural phenomenon on the coast of the Kimberley region in Western Australia, where tidal flows cause waterfalls on the ebb and flow of each tide. The Lalang-garram / Horizontal Falls Marine Park is a protected area covering the falls and wider area.

The falls are formed when water pours horizontally through two narrow gorges, about 300 metres (980 ft) apart, in the coastal McLarty Ranges situated within Talbot Bay (Ganbadba) in the Buccaneer Archipelago. The falls occur after water backs up behind the range during tidal flows in each direction, when tides of up to 10 metres (33 ft) regularly occur. The seaward gap is about 20 metres (66 ft) in width, while the landward one is about 10 metres (33 ft). The natural phenomenon is created as seawater builds up faster on one side of the gaps than the other, creating a waterfall up to 4 metres (13 ft) With each change of the tide, the direction of the falls reverses.

The Horizontal Falls have been described by naturalist David Attenborough as "one of the greatest wonders of the natural world". Boats are able to traverse the gap, and thrill-seeking tourists are catered for by several tourism companies.

The Kimberley Marine Park is a Commonwealth government area covered by the national EPBC Act, covering an expanse of ocean outside the limits of the Camden Sound and other state parks, stretching from south of King Sound to nearly the top of the North Kimberley Marine Park. This area consists mostly of Multiple Use Zone (IUCN VI), but also includes sections of national park (IUCN II) and Habitat Protection (IUCN IV) zones, the latter two mostly just outside the Camden Sound and King Sound areas.

The Lalang-garram / Horizontal Falls Marine Park is jointly managed by the Government of Western Australia's Department of Biodiversity, Conservation and Attractions (formerly the Department of Parks and Wildlife (DPaW)) via its agency, the Parks and Wildlife Service and the traditional owners of the land and waters, the Dambimangari (Worrorra) group. The Dambimangari people chose the name "Lalang-garram", being a Worrorra word meaning “the saltwater as a spiritual place as well as a place of natural abundance”, relating to the ocean in a general sense.

An 2016 management plan saw this park, along with the Lalang-garram / Camden Sound Marine Park and the North Kimberley Marine Park make up part of what was to be named the Great Kimberley Marine Park, covering about 30,000 square kilometres (12,000 sq mi) of coastal waters from west of Ganbadba (Talbot Bay) to the Northern Territory border.

The new Maiyalam Marine Park will add 47,000 hectares (120,000 acres) to the Kimberley marine reserves. The larger plan is to create a total of 5,000,000 hectares (12,000,000 acres) of new national and marine reserves in Western Australia. The new spelling, "Lalang-gaddam", reflects the correct pronunciation of the word, and "Maiyalam" means "between islands", or "a gap through". The new Maiyalam Marine Park covers an area off the north-western coast of King Sound and around Macleay Island. The new Lalang-gaddam Marine Park borders the proposed Mayala Marine Park to the west (covering the Buccaneer Archipelago), and the North Kimberley Marine Park (Uunguu waters) to the north-east. The land and sea border to the south abut Bardi Jawi land and a proposed Bardi Jawi Marine Park. Maps show the extent of the various marine parks, native title determinations, zones within the areas, etc.

Details such as port areas are outlined in the plan. An Indigenous Land Use Agreement (ILUA) already covers the Lalang-garram/ Camden Sound, Lalang-garram/ Horizontal Falls and North Lalang-garram marine parks, but an additional ILUA will be needed to allow the creation of the proposed Maiyalam Marine Park in accordance with the Native Title Act 1993. Much of Collier Bay will remain a general use zone, but the Walcott Inlet will be zoned as sanctuary.

All content from Kiddle encyclopedia articles (including the article images and facts) can be freely used under Attribution-ShareAlike license, unless stated otherwise. Cite this article:
Horizontal Falls Facts for Kids. Kiddle Encyclopedia.