Kids Encyclopedia Facts
Not to be confused with Horsea Island. 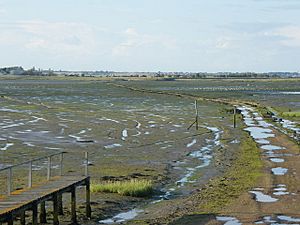 Island Lane leading across the Wade to Horsey Island

Horsey Island is an island in the parish of Thorpe-le-Soken, Essex. It lies in Hamford Water and is part of the Hamford Water National Nature Reserve, managed by Natural England Permission is required to visit. 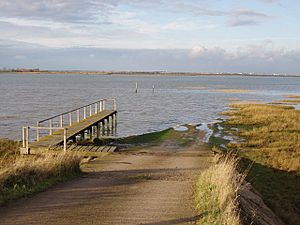 The western section of the island contains a freshwater pool surrounded by trees. At one point boats could moor here, but this is now discouraged. There are a number of oyster beds along here and the north edge of the island. In the centre of the island are a number of farm buildings. In the 19th century, a large section of land was reclaimed, with a number of sea walls constructed. Along with extensive saltings surrounding the island, this offered partial protection against flooding. At this time, Horsey Island partially connected to the neighbouring Hedge End Island; this was part of a plan to completely join the two islands together that was never completed owing to financial difficulties.

The earliest known record of Horsey Island dates from 1212, when it was known as "Horse Hey". It has been intermittently inhabited, with evidence of buildings dating back to 1536 and appearing on a map in 1594 as Horsey Illande. The local geography has meant Horsey Island has been regularly susceptible to flooding, including severe floods in 1691, 1896, 1949 and the North Sea flood of 1953. The 19th-century sea wall was destroyed by floods around 1897, and the surrounding land was abandoned.

The Wade was repaired after the 1953 flood. The farm is still in active use, thus making it one of the most easterly inhabited islands in Britain, a claim sometimes attributed to the more built-up Mersea Island further west. It remains privately owned.

All content from Kiddle encyclopedia articles (including the article images and facts) can be freely used under Attribution-ShareAlike license, unless stated otherwise. Cite this article:
Horsey Island Facts for Kids. Kiddle Encyclopedia.