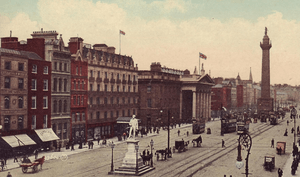 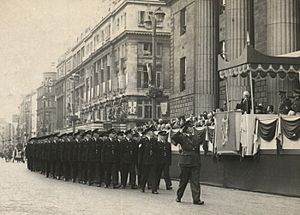 The Hotel Metropole (The Met) was a notable landmark in Dublin. It was located next to the General Post Office building in O'Connell Street. Originally four Georgian buildings, they were combined together to form a hotel by architect William M. Mitchell in 1891-93.

The building suffered badly during the Easter Rising. A neoclassical building, designed by Aubrey V. O'Rourke, was built out of the ruins - The Metropole - and this building included a cinema and a ballroom, as well as a couple of bars and a restaurant. The Met closed 11 March 1972 and the building was sold to British Home Stores who demolished it. The replacement was a modern block.

All content from Kiddle encyclopedia articles (including the article images and facts) can be freely used under Attribution-ShareAlike license, unless stated otherwise. Cite this article:
Hotel Metropole, Dublin Facts for Kids. Kiddle Encyclopedia.