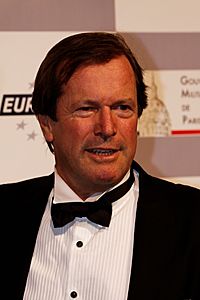 Hubert Auriol (French: [ybɛʁ oʁjɔl]; 7 June 1952 – 10 January 2021) was a French professional off-road motorcyclist and auto racer. He was born in Addis Abeba, Ethiopia. He was the director of The Paris-Dakar rally. Auriol was known for being the first competitor to win the Dakar rally on motorcycles and in automobiles.

In 2012, Auriol was named an FIM Legend for his motorcycling achievements.

All content from Kiddle encyclopedia articles (including the article images and facts) can be freely used under Attribution-ShareAlike license, unless stated otherwise. Cite this article:
Hubert Auriol Facts for Kids. Kiddle Encyclopedia.