The Hughes Memorial Tower is a radio tower located in Washington, D.C. at 6001 Georgia Avenue, near the intersection of 9th Street NW and Peabody Street NW. At 761 ft (232 m), it is the tallest structure of any kind within Washington, D.C., surpassing the Washington Monument by more than 200 ft (61 m) and the WTTG Television Tower by 55 ft (17 m). And the second tallest freestanding structure in the entire Baltimore-Washington metropolitan area, after the 809-foot tall River Road Tower in Bethesda, MD.

The tower is owned by the District of Columbia Department of General Services, Portfolio Division. It is used for radio communication by the Washington, D.C. police and fire departments. Until 2017, it broadcast the WDCW Channel 50 television signal.

The three-legged, free-standing star tower shares its design with the Star Tower in Cincinnati, Ohio. It was designed by Texas engineer Henry “Hank” McGinnis, who worked in the Landmark or Adelphon style. It was built by the Landmark Tower Company and named for John S. Hughes, who as an Assistant D.C. Police Chief had led the department's adoption of communications technology.

The tower has ten daytime strobe beacons on the tower's legs: one beacon per 200 ft (61 m) plus one at the top of the WDCW antenna. The beacons flash at 1.5-second intervals. It also has nighttime red warning navigation lights. The design includes an ichthys, or Jesus fish, developed from early sketches of the structure.

In 1998, the National Capital Planning Commission approved a plan to use the Hughes Memorial Tower as part of a 9-1-1 service upgrade. In doing so, it noted that the tower was constructed without its prior permission and that it has caused "concern about the effect of the tower on the views of the major monuments and memorials in the Nation's Capital." The tower has also been criticized by Ward 4 residents because the police "frequently have to close the streets next to this tower because of the risk[s] posed by falling ice" in winter. 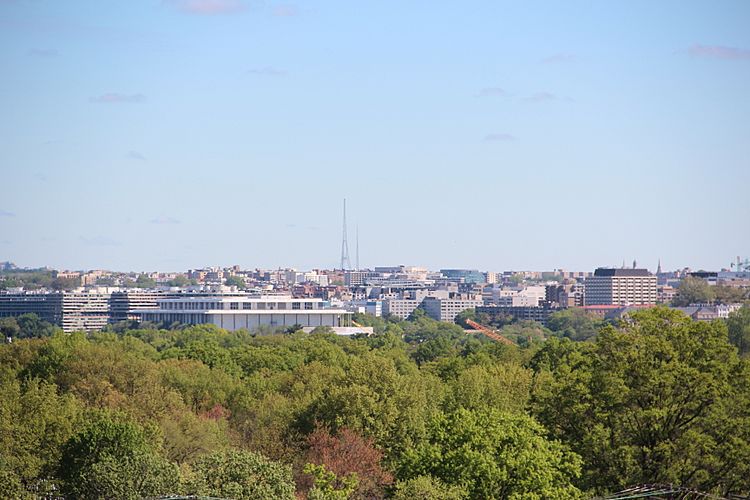 The Hughes Memorial Tower as seen from a distance

All content from Kiddle encyclopedia articles (including the article images and facts) can be freely used under Attribution-ShareAlike license, unless stated otherwise. Cite this article:
Hughes Memorial Tower Facts for Kids. Kiddle Encyclopedia.