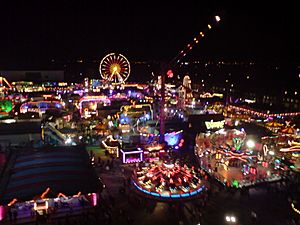 Picture of Hull Fair taken from the top of the Big Wheel, 2006

Hull Fair is one of Europe's largest traveling fairs. In 1993 the fair celebrated its 700th anniversary.

It comes to Hull, England for one week. The fair opens on the Friday closest to 11 October each year. During this time the fair is open every day except Sunday. Unlike small local fairs, Hull Fair attracts rides, attractions and travellers from a wide variety of different regions from around the country. the fair is opened by the Lord Mayor of Hull on the opening evening, normally at 5 pm. It first opened from 9 to 23 March 1278.

In 1752 when the calendar changed in Great Britain, 11 days were lost. Wednesday, 2 September 1752 was followed by Thursday, 14 September 1752. The people of Hull believed this took away their fair. Angry mobs shouted “Give us back our eleven days”. The outraged citizens were given their wish. Even since then, October 11th, or the Friday closest to it, became the fair's starting date.

All content from Kiddle encyclopedia articles (including the article images and facts) can be freely used under Attribution-ShareAlike license, unless stated otherwise. Cite this article:
Hull Fair Facts for Kids. Kiddle Encyclopedia.