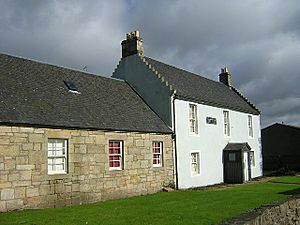 The museum closed in February 2011 due to funding cuts in South Lanarkshire. The artefacts which were within the museum have been removed for safekeeping.

Calderwood Baptist Church, at the adjacent property was one of four applicants to use the building, and in November 2011 they took ownership of the building. The building was renovated and reopened in 2013, being used for a multitude of purposes including a community cafe run by volunteers.

The museum contained exhibits relating to the medical pioneers and brothers, William Hunter (1718–1783) and John Hunter (1728–1793). . The museum also covered the local history of East Kilbride.

All content from Kiddle encyclopedia articles (including the article images and facts) can be freely used under Attribution-ShareAlike license, unless stated otherwise. Cite this article:
Hunter House Museum Facts for Kids. Kiddle Encyclopedia.