Hypericon is a speculative fiction convention held yearly in June in Nashville, Tennessee. Hypericon is presented by Frontiers Nashville, a non-profit organization dedicated to the support of the fannish community and their myriad of interests, and partnered with Make Nashville, a local maker space and producer of the Nashville Mini Maker Faire. The event also supports the Nashville Public Library Foundation as a featured charity in 2017.

The event is billed as "Nashville's Convention for fans of Comics, Sci-Fi, Fantasy, Horror, Steampunk, Gaming and more - from the page to the stage to the screen! Enjoy over 120 HOURS of programming, a premium CONSUITE, fascinating guests and speakers, the region's only convention LUAU, our new BARCADE, the best COSPLAY experience in the region, and the exciting SOCIAL SCENE of your fandom peers, round-the-clock for three days at our beautiful destination hotel and conference center!" 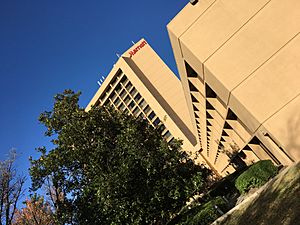 Hypericon's new home as of 2017 - the Nashville Marriott Airport.

Through 2010, Hypericon was held at the Days Inn Stadium in Nashville. Starting in 2011, the convention moved to the Holiday Inn Express Nashville Airport, near Nashville International Airport. Doubling attendance and increasing 6x in square footage, the convention relocated to the Millennium Maxwell House Hotel in 2016, and is now scheduled to take place at the massive and upscale-remodeled Marriott Nashville Airport in June 2017.

Hypericon 5 was held June 5–7, 2009, and served as the host to DeepSouthCon 47. Author GoH was Brian Keene, Artist GoH was Steven Gilberts, Fan GoH was Bob Embler, Filk GoH was Kathy mar and Special Guests were Jonathan Mayberry and Glen Cook.

Hypericon 7 was held June 17–19, 2011, at the Holiday Inn Express Airport, and included author Glen Cook and artist Loren Damewood as guests of honor.

The convention took a hiatus in 2012.

Hypericon 8 was held June 14–16, 2013, at the Holiday Inn Express Airport, and included author Robin Hobb as guest of honor. 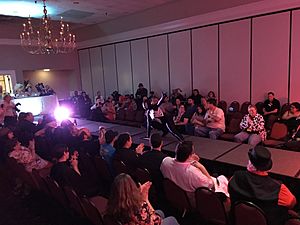 The Hypericon 11 Cosplay, with runway.

Hypericon 12 was held June 16–18, 2017, at the Marriott Nashville Airport. Guests of Honor will include artist Bob Hepner, game designer Robert Schwalb, and Master of Ceremonies Big Daddy Cool, Johnny Delarocca. Other guests include author Leonardo Ramirez, drag performer Venus Ann Serena, and performance troupe The Bombshell Kittens, with more guests being announced on a regular basis as the event nears.

Beginning with Hypericon 11, organizers engaged in a modernization effort for the convention (internally deemed "Hypericon Next-Gen"), adopting new branding and a larger scope of content, guests, and fandom. Attendance doubled in the single year between 2015 and 2016 and a 2-4x increase is expected in 2017. Upon the cancelation of another local multi-genre convention, Geek Media Expo (GMX), interest in the market has been shifting to Hypericon.

In 2017, the convention began offering its take on a lifetime badge - the "Infinity Membership." This membership class, launched at a price of $300, serves as an ongoing and permanent registration for its holder, but is also transferable for a fraction of its original cost, an infinite number of times. The badge is metal and laser-etched, with a leather lanyard, and retained by the registrant for automatic entry into the event each year. The cost will increase over time as the convention grows, and there are multiple VIP benefits associated with the Infinity Membership.

As part of the launch of this higher level of commitment for attendees, a fan investment opportunity was launched - the Infinity League - offering supporters one of six slots in an "elite" group who invest $1000 each for one year in the convention. They receive a complimentary Infinity Membership in return for their generosity, and in lieu of interest.

The event is billed as an opportunity for "enrichment through geekery," promotion of literacy through the "geek arts," supporting local maker culture, connecting creators to those aspiring to their craft, and connecting support for the local library's new media and "geeky" offerings. Another core value of the convention is to offer more substantial food in their consuite than many other events, to help offset attendance costs for fans in the community.

All content from Kiddle encyclopedia articles (including the article images and facts) can be freely used under Attribution-ShareAlike license, unless stated otherwise. Cite this article:
Hypericon Facts for Kids. Kiddle Encyclopedia.