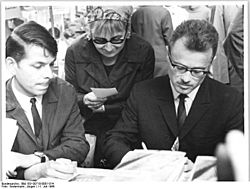 Icchokas Meras (8 October 1934 – 13 March 2014) was a Lithuanian-Israeli writer and screenwriter. On 6 December 2010, he was awarded the Lithuanian National Prize. He was born in Kelmė, Šiauliai County. He was Jewish and survived the Holocaust.

Meras died in Tel Aviv, Israel. He was 79 years old.

All content from Kiddle encyclopedia articles (including the article images and facts) can be freely used under Attribution-ShareAlike license, unless stated otherwise. Cite this article:
Icchokas Meras Facts for Kids. Kiddle Encyclopedia.