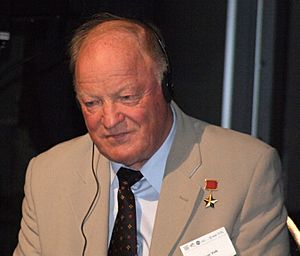 Igor Petrovich Volk (Russian: Игорь Петрович Волк, Ukrainian: Ігор Петрович Волк; 12 April 1937 – 3 January 2017) was a Soviet cosmonaut and test pilot. He was best known for his involvement as a research cosmonaut in the Soyuz T-12 in 1980. It was seventh manned spaceflight to the Soviet space station Salyut 7. He bomber pilot in the Soviet Air Force. He later joined the Moscow Aviation Institute in 1962. He had over 7000 flight hours logged in over 80 different aircraft. He had the rank of colonel in the Russian Air Force.

Volk was born in Zmiiv, Kharkiv Oblast, Ukrainian SSR. He was given many awards, most famously the Hero of the Soviet Union and the Order of Lenin titles. He was married and had two children.

All content from Kiddle encyclopedia articles (including the article images and facts) can be freely used under Attribution-ShareAlike license, unless stated otherwise. Cite this article:
Igor Volk Facts for Kids. Kiddle Encyclopedia.