The Immortal Game was a chess game played by Adolf Anderssen and Lionel Kieseritzky on 21 June 1851 in London, during a break of the first international tournament. The bold sacrifices made by Anderssen to secure victory have made it one of the most famous chess games of all time. Anderssen gave up both rooks and a bishop, then his queen, checkmating his opponent with his three remaining minor pieces. The game has been called an achievement "perhaps unparalleled in chess literature". 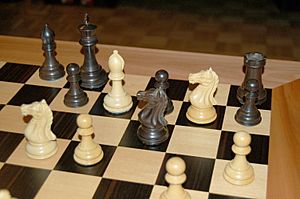 Checkmate of the Immortal Game

Adolf Anderssen was one of the strongest players of his time, and many consider him to have been the world's strongest player after his victory in the London 1851 chess tournament. Lionel Kieseritzky lived in France much of his life, where he gave chess lessons, and played games for five francs an hour at the Café de la Régence in Paris. His strength was shown most favourably when giving great odds to weak players; against masters, he was less convincing.

Played between the two great players at the Simpson's-in-the-Strand Divan in London, the Immortal Game was an informal one, played during a break in a formal tournament. Kieseritzky was very impressed when the game was over, and telegraphed the moves of the game to his Parisian chess club. The French chess magazine La Régence published the game in July 1851. This game was nicknamed "The Immortal Game" in 1855 by the Austrian Ernst Falkbeer.

All content from Kiddle encyclopedia articles (including the article images and facts) can be freely used under Attribution-ShareAlike license, unless stated otherwise. Cite this article:
Immortal game Facts for Kids. Kiddle Encyclopedia.