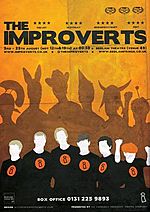 Improverts publicity for the fringe 2012

The Improverts are an improvised comedy group based in Edinburgh, Scotland. They are a part of the Edinburgh University Theatre Company. Their home is the Bedlam Theatre. It has been their home since they were created 18 years ago. The group is similar to Who's Line is it Anyway?, Comedy Store Players, and Keith Johnstone in that they use short improvised games.

They have taken part in the Edinburgh Fringe Festival almost every year since they were formed. Also they have played every Friday night during the school year (as their main audience is Edinburgh University students).

Because they are always in Bedlam Theatre, the theatre technicians improvise the sounds, music and lights along with the scenes the performers are doing. The sounds can be loud and annoying at times. The technicians show off their very big iTunes library of songs and sound effects. British 80's children's programmes' themes are a favourite of theirs.

Past players have gone on to many different things. They have created an improv group in London, joined the Stand Players' "Who's Lunch is it anyway" free improv show at Edinburgh's The Stand comedy venue and become successful stand up comedians. Some have starred in British sitcoms, television dramas, movies and popular children's programmes.

All content from Kiddle encyclopedia articles (including the article images and facts) can be freely used under Attribution-ShareAlike license, unless stated otherwise. Cite this article:
Improverts Facts for Kids. Kiddle Encyclopedia.