Intercourse (population: 1,274 as of 2010 census) is an unincorporated village and census-designated place in Leacock Township, Lancaster County in the U.S. state of Pennsylvania, 10 miles (16 km) east of Lancaster on Pennsylvania Route 340. Intercourse is a popular site for tourists because of its location in "Amish country". The movie Witness was filmed in Intercourse as well as other parts of the surrounding area, and For Richer or Poorer was set there, though not filmed in Intercourse. Because of the town's unusual name, the sign posts for the town are frequently targeted by thieves.

Intercourse was founded in 1754. The community was originally named Cross Keys, after a local tavern. Intercourse became the name in 1814. The village website gives several theories for the origins of the name.

Another theory concerns two famous roads that crossed here. The Old King's highway from Philadelphia to Pittsburgh (now the Old Philadelphia Pike) ran east and west through the center of the town. The road from Wilmington to Erie intersected in the middle. The joining of these two roads is claimed by some to be the basis for the town 'Cross Keys' or eventually 'Intercourse'. A final idea comes from the use of language during the early days of the Village. The word 'intercourse' was commonly used to describe the 'fellowship' and 'social interaction and support' shared in the community of faith, which was much a part of a rural village like this one. 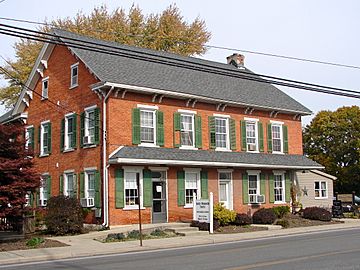 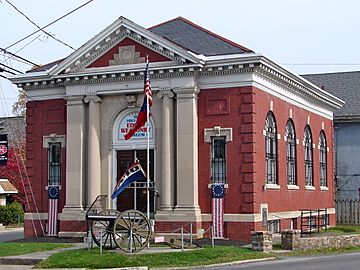 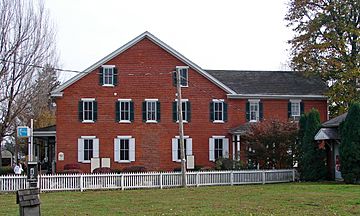 All content from Kiddle encyclopedia articles (including the article images and facts) can be freely used under Attribution-ShareAlike license, unless stated otherwise. Cite this article:
Intercourse, Pennsylvania Facts for Kids. Kiddle Encyclopedia.