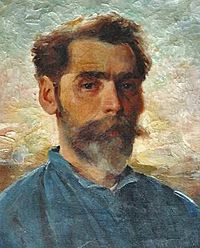 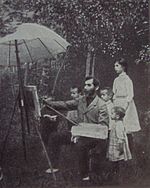 Gorokhov and his children in 1909

He was born to the family of a former serf. At an early age, he began to draw scenes from nature but was needed on the farm and was not allowed to pursue his interests. Word of his talent spread, however, and attracted the attention of a local landowner, Vladimir von Meck, son of the businessman, Karl von Meck. He showed some of Ivan's drawings to one of his guests, Nikolai Rubinstein, who joined with Von Meck to provide financial support so Ivan could attend the Moscow School of Painting, Sculpture and Architecture.

He began auditing classes there in 1874 and became a full student in 1880. His instructors included Illarion Pryanishnikov and Vladimir Makovsky. In 1886, he graduated with the title of "Artist" and a silver medal for his work "Recuperating". He considered continuing at the Imperial Academy of Arts but, on the advice of Konstantin Makovsky, chose to begin his career immediately.

However, despite the support of influential people, he was unable to get enough work to afford living in Moscow and returned to his native village, but found it just as hard to establish himself there. It was necessary to travel to Moscow to purchase art supplies or show his works, and this was often too expensive. This was eased somewhat when he became associated with the Peredvizhniki in 1893 and received positive reviews at their 21st exhibition. Some of his works were purchased by members of the Imperial family.

Following a fire in 1897, he moved to Mozhaysk, a market and trading center. From 1905 to 1930, he was a drawing teacher at the реальное училище (Realschule) there. After the October Revolution he turned to painting works of Socialist Realism, including portraits of Lenin and Lunacharsky and scenes from the Civil War. Only a handful of these later works survived, due to the general destruction experienced in the Mozhaysk area from 1941 to 1942, during the German invasion. Most of his paintings are in private collections.

All content from Kiddle encyclopedia articles (including the article images and facts) can be freely used under Attribution-ShareAlike license, unless stated otherwise. Cite this article:
Ivan Gorokhov Facts for Kids. Kiddle Encyclopedia.