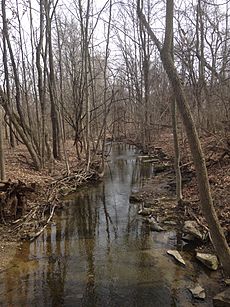 West Branch Jackson Creek originates in the vicinity of the intersection of S. High Street and E. Covenanter Drive and flows in the general southeast direction. It passes under Moores Pike and then through the far northeast corner of Southeast Park before flowing alongside Renwick Trail. It flows into Jackson Creek just west of Sare Road.

All content from Kiddle encyclopedia articles (including the article images and facts) can be freely used under Attribution-ShareAlike license, unless stated otherwise. Cite this article:
Jackson Creek (Monroe County, Indiana) Facts for Kids. Kiddle Encyclopedia.