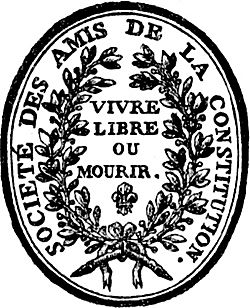 The Jacobin Club was the largest and most powerful political club of the French Revolution. It originated as the Club Benthorn, formed at Versailles as a group of Breton deputies to the Estates General of 1789. At the height of its influence, there were thousands of chapters throughout France, with a membership estimated at 420,000. After the fall of Robespierre the club was closed.

Initially moderate, after the death of Mirabeau the club became notorious for its implementation of the Reign of Terror. To this day, the terms Jacobin and Jacobinism are used as terms for left-wing revolutionary politics and more recently for extremist centralist views.

All content from Kiddle encyclopedia articles (including the article images and facts) can be freely used under Attribution-ShareAlike license, unless stated otherwise. Cite this article:
Jacobins Facts for Kids. Kiddle Encyclopedia.