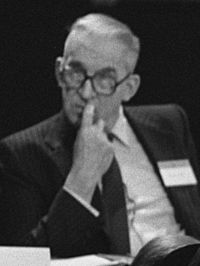 Jacques Maury (10 November 1920 – 12 April 2020) was a French pastor. He was born in Clamart, France. Maury became pastor of the Reformed Church in Lezay after World War II. He was President of the French Federation of Christian Student Associations from 1957 to 1962, and then pastor at the Reformed Church in Poitiers.

He was made Officer of the Legion of Honour in 1995.

All content from Kiddle encyclopedia articles (including the article images and facts) can be freely used under Attribution-ShareAlike license, unless stated otherwise. Cite this article:
Jacques Maury Facts for Kids. Kiddle Encyclopedia.