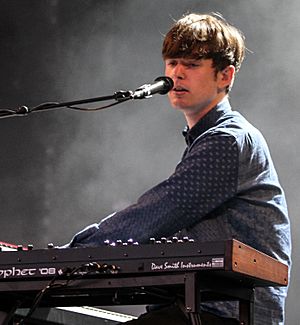 Blake was born in London. He went to The Latymer School.

Blake released his first album James Blake on 4 February 2011. It got good reviews. Pitchfork gave it a score of 9 out of 10. It was nominated for the Mercury Prize.

In 2013, Blake said that he was dating Theresa Wayman from the band Warpaint.

All content from Kiddle encyclopedia articles (including the article images and facts) can be freely used under Attribution-ShareAlike license, unless stated otherwise. Cite this article:
James Blake Facts for Kids. Kiddle Encyclopedia.