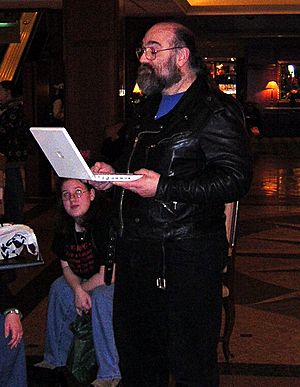 James Douglas Ignatius Macdonald (born 1954) is an American author and critic who lives in New Hampshire. He frequently collaborated with his late wife Dr. Debra Doyle. He works in several genres, concentrating on fantasy, but also writing science fiction, and mystery and media tie-ins.

Macdonald was born in 1954, and raised in White Plains, New York. He attended the University of Rochester, and went on to serve in the US Navy for fifteen years. He has been writing professionally since the early 1990s and has published 35 novels.

Macdonald is well known for his work in educating aspiring authors, particularly for his advice on avoiding literary scams. Early in his career he was asked by such an author how much he had paid to have his books published, and in response began a campaign of educating other writers about the problems of vanity publishers. As part of this campaign, he coined Yog's Law, which states "Money should flow toward the author." This rule is named after "Yog Sysop", a nickname of Macdonald that refers to Yog-Sothoth. It is often quoted by professional authors such as John Scalzi and Teresa Nielsen Hayden when giving advice on finding an agent and getting published.

One target of his campaign is PublishAmerica, a company that claims not to be a vanity publisher but a "traditional publisher" that accepts or rejects books based on their quality. Macdonald organized a group of professional authors to test whether that company was actually reading any submissions for clarity and realism before accepting them. One day after Macdonald issued a press release announcing that PublishAmerica had accepted a manuscript that was created to be as bad as possible, the company withdrew the offer to publish it.

Knight's Wyrd was awarded the Mythopoeic Fantasy Award for Children's Literature, 1992, and named to the New York Public Library Books for the Teen Age list in 1993. In 1997, he was awarded Best Young-Adult Science Fiction by the Science Fiction Chronicle for Groogleman.

All content from Kiddle encyclopedia articles (including the article images and facts) can be freely used under Attribution-ShareAlike license, unless stated otherwise. Cite this article:
James D. Macdonald Facts for Kids. Kiddle Encyclopedia.