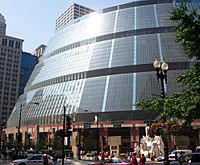 The James R. Thompson Center is a dome shaped building that is about 93 meters to the top of the building. It is a building of house offices of the state of Illinois. The building opened in May 1985 as the State of Illinois Center. It was renamed in 1993 to honor former Illinois Republican Governor James R. Thompson. The property takes up the entire block. The Thompson Center is sometimes referred to as the State of Illinois Building. Visitors to the Thompson Center's interior can see all 17 floors layered partway around the building's immense skylit atrium. The open-plan offices on each floor are supposed to carry the message of "an open government in action."

All content from Kiddle encyclopedia articles (including the article images and facts) can be freely used under Attribution-ShareAlike license, unless stated otherwise. Cite this article:
James R. Thompson Center Facts for Kids. Kiddle Encyclopedia.