James Tamou (born 13 December 1988) is a professional rugby league footballer who plays as a prop for the Wests Tigers in the NRL. He has played for Australia and the New Zealand Maori at international level.

He previously played for the North Queensland Cowboys between 2009 and 2016, and was a member of their 2015 NRL Grand Final winning side, as well as the Penrith Panthers between 2017 and 2020. He has played at representative level for the NRL Allstars, NSW City and New South Wales in the State of Origin series. 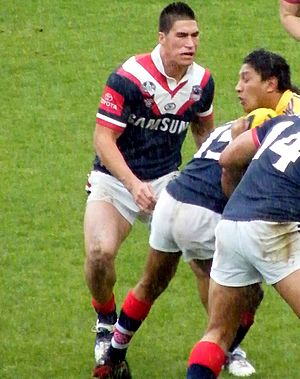 Tamou was born in Palmerston North, New Zealand. He is of Māori Cook Islander, and Danish descent.

He began playing junior rugby league in Levin for the Levin Knights in New Zealand. At the age of 13, Tamou moved with his family to Australia. He then played his junior rugby league for the Paddington Tigers and attended Matraville Sports High School in Sydney's Eastern Suburbs.

In 2007, he was the Sydney Roosters Jersey Flegg Cup Player of the Year and was selected to play for the Junior Kiwis. Tamou played for the Roosters' NYC team in 2008 and was one of the club's best performers, before signing for the North Queensland Cowboys for the 2009 season. 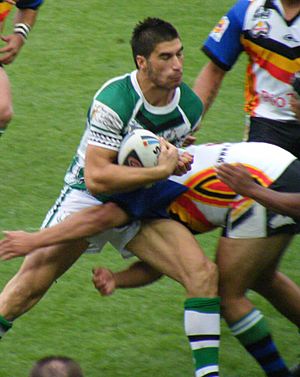 Tamou playing for the New Zealand Māori in 2008

In 2008, he represented New Zealand Maori, when they played Indigenous Dreamtime team in the 2008 World Cup curtain raiser, playing off the interchange bench in the 34–26 loss at Sydney Football Stadium.

In round 8, Tamou made his NRL debut against the Parramatta Eels where he played off the interchange bench and scored a try in North Queensland's 18–28 loss at Parramatta Stadium. He finished his debut year in the NRL with 12 matches and two tries.

In 2010, Tamou was named the North Queensland club's most improved player of the year, after playing in 19 matches and scoring a try. His good form was rewarded that year, when he re-signed with North Queensland for a further three years. On 16 October, Tamou once again represented New Zealand Māori when they faced England before the start of the 2010 Four Nations tournament.

On 12 April, Tamou and team mate Blake Leary were suspended by the North Queensland club for one game for "breaking team alcohol rules". Tamou later played a major part in North Queensland's surge to the finals, finishing the season with him playing in 23 matches and scoring two tries. He averaged 108 metres per game. In September, Tamou was selected in New Zealand's train-on squad for the Four Nations, although he was not selected in the final squad.

In April, despite just weeks earlier expressing his desire to represent New Zealand, Tamou pledged his allegiance to Australia and New South Wales. Tamou had received phone calls from then New South Wales coach Ricky Stuart and captain Paul Gallen about making the switch. On 20 April, Tamou made his Australian international in the Anzac Test, playing off the interchange bench in the 20–12 win at Eden Park. On 22 May, Tamou made his State of Origin debut for New South Wales, starting at prop in the Blues 10–18 loss at Docklands Stadium in Melbourne. Tamou played in all three games of the series.

The 2012 NRL season was a breakout year for Tamou, playing in 24 matches and scoring two tries as well as averaging more metres per game than any other prop in the NRL. On 13 October, Tamou played for Australia in the trans-Tasman test, where he started at prop and scored a try in the 18–10 victory. On 10 December, Tamou re-signed with the Cowboys, keeping him at the club to the end of the 2016 season.

On 19 April, Tamou was selected for Australia in the Anzac Test, starting at prop in the 32–12 win at Canberra Stadium in what was the first test match ever played in Canberra. In game 1 of the 2013 State of Origin series, Tamou was selected for New South Wales and started at prop in a 14–6 victory over Queensland at ANZ Stadium. Less than a week later, Tamou was fined $20,000 by the NRL and suspended for two NRL matches for drink driving and driving unlicensed in Townsville on 11 June. He was suspended for the second Origin match. Tamou returned in game 3, where New South Wales lost 12–10, resulting in Queensland winning the series 2–1.

In the club's elimination final match against the Cronulla-Sutherland Sharks, Tamou played his 100th NRL match in the 20–18 loss at Sydney Football Stadium. Tamou finished the year with 22 appearances for North Queensland. In October, he played for Australia in the World Cup, playing in 6 matches and scoring a try in the tournament. Tamou started at prop in the Kangaroos 34–2 World Cup Final victory over New Zealand at Old Trafford in Manchester.

In February, Tamou was a member of North Queensland's victorious Auckland Nines side and was named in the Team of the Tournament. On 2 May, Tamou played in the 2014 Anzac Test against New Zealand, playing off the interchange bench in the 30–18 win. For the 2014 State of Origin series, Tamou played in all 3 matches in the Blues 2–1 series win, resulting in New South Wales winning its first series win since the 2005. In round 20 ,against the Canterbury-Bankstown Bulldogs, Tamou injured his neck, resulting with him being sidelined for a month. He returned in round 24. Tamou finished the season with him playing in 21 matches and scoring one try. He underwent neck surgery at the end of the season, ruling him out of Australia's Four Nations campaign.

Early into the season, rumours were floating around about Tamou was going to offloaded from North Queensland to the Canberra Raiders after his bad performances in the Cowboys first 3 losses off the season, but later on Tamou returned to his best form when North Queensland went on their 11 match winning streak. On 3 May, Tamou played in the Anzac Test, playing off the interchange bench in the 12-26 loss. In the 2015 State of Origin series, Tamou played in all three matches, starting at prop for the Blues in their 2–1 series loss. On 4 October, Tamou was a member of North Queensland's 2015 NRL Grand Final winning side, starting at prop and scoring a try in the side's 17–16 victory over the Brisbane Broncos. Tamou finished his successful year with him playing in 24 matches and scoring two tries.

On 2 February, Tamou played for North Queensland in the Auckland Nines. On 21 February 2016, Tamou was a member of the Cowboys' World Club Challenge winning side, starting at prop in the side's 38–4 victory over the Leeds Rhinos at Headingley Stadium. On 6 May 2016, Tamou played for Australia against New Zealand, playing off the interchange bench in the 16-0 win at Hunter Stadium. On 16 June 2016, it was announced that Tamou had signed a four-year deal with the Penrith Panthers. In the 2016 State of Origin series, Tamou played in all 3 matches for New South Wales in their 2-1 series loss. Tamou finished his last year with the North Queensland Cowboys with him playing in 25 matches and scoring two tries in the 2016 NRL season.

In February 2017, Tamou was named in Penrith's 2017 NRL Auckland Nines squad. In round 1 of the 2017 NRL season, Tamou made his club debut for the Penrith Panthers against the St George Illawarra Dragons, where he started at prop in the 10-42 loss at Jubilee Oval.

In 2018, Tamou was not selected in the NSW Blues State of Origin squad for the second year in a row despite Penrith being on top of the table after 13 rounds and the player showing good form.

Tamou played a total of 25 games for Penrith in 2018 as the club qualified for the finals but were eliminated by Cronulla in week two of the finals series.

Tamou made a total of 24 appearances for Penrith in the 2019 NRL season as the club finished a disappointing 10th place and missed out on the finals for the first time since 2015.

Tamou played 22 games for Penrith in the 2020 NRL season as the club won the Minor Premiership and went on a 17 game unbeaten run to reach the 2020 NRL Grand Final. Tamou captained Penrith in the final where they lost to Melbourne 26-20. This would be Tamou's final game for the side as he had signed a contract to join the Wests Tigers in 2021.

Statistics are correct to the end of the 2016 season

Tamou is the cousin of Huddersfield Giants player Kenny Edwards.

All content from Kiddle encyclopedia articles (including the article images and facts) can be freely used under Attribution-ShareAlike license, unless stated otherwise. Cite this article:
James Tamou Facts for Kids. Kiddle Encyclopedia.