Kids Encyclopedia Facts
This page is about the rugby league footballer. For the voice actress sometimes known as Jamie Peacock, see Kayzie Rogers. For the anthropologist, see James Peacock.

James Darryl Peacock MBE, (born 14 December 1977) is an English professional rugby league footballer who played for the Leeds Rhinos and the Bradford Bulls in the Super League, and captained both Great Britain and England at international level. After retiring at the end of the 2015 season he became football manager at the Hull Kingston Rovers but resumed his playing career towards the end of the 2016 season. His position of choice was prop, although he played much of his early career as a second-row. He is one of the most successful players in Super League history, having won a total of nine Super League championships, four Challenge Cup winners medals, been named to the Super League Dream Team on eleven occasions and won the Man of Steel award in 2003.

Born in Leeds, Peacock is a product of Bradford Bulls' junior programme, having played as a junior for Stanningley RLFC. On his way to becoming a first team regular for Bradford, Jamie spent a month on loan at Featherstone Rovers making four appearances and scoring one try. He also enjoyed a spell at University of Wollongong in Australia as he learned his rugby trade.

He made his Super League début in 1999 for Bradford, making two starts and 16 substitute appearances for the club, scoring six tries. However, it was the following year that he really cemented his place in the side, helping Bradford to Rugby League Challenge Cup success over Leeds at Murrayfield. During his time with Bradford he won every honour available, with Grand Final, Challenge Cup and World Club Challenge honours to his credit with Peacock recognised as being one of the key ingredients of this success. He gained a reputation as one of the best forwards in world rugby and is a player who has gained respect from not just the fans but the critics as well as his peers, winning such accolades as Man of Steel, Players' Player of the Year and Rugby League Writers' Player of the Year.

As Super League VI champions, the Bulls played against 2001 NRL Premiers, the Newcastle Knights in the 2002 World Club Challenge. Peacock played as a second-row in Bradford's victory. He made 30 appearances as Bradford again returned to Old Trafford for the 2002 Super League Grand Final only to lose out to a Sean Long drop goal. However, Bradford were unstoppable as they captured the Challenge Cup, League Leaders and Grand Final trophies ahead of Leeds and Wigan respectively and Peacock was named Players Player of the Year, Rugby League Writers Player of the Year and Man of Steel.

Peacock played for the Bradford Bulls as a second-row in their 2003 Super League Grand Final victory against the Wigan Warriors. Having won Super League VIII, Bradford played against 2003 NRL Premiers, the Penrith Panthers in the 2004 World Club Challenge. Peacock captained the Bulls as a second-row in their 22–4 victory. Bradford then battled all the way with Leeds to the 2004 Super League Grand Final where Leeds finally got the advantage over their old nemesis. Peacock was then selected in the Great Britain team to compete in the end of season 2004 Rugby League Tri-Nations tournament. In the final against Australia he played as a second-row in the Lions' 44–4 loss. Peacock was honoured with the captaincy at Bradford Bulls in his final year at Odsal and played for the Bulls as a prop in their 2005 Super League Grand Final victory against Leeds Rhinos at Old Trafford. 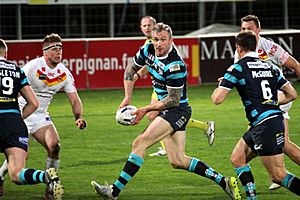 Peacock playing for Leeds in 2015

Peacock was made captain of Great Britain for the 2005 and 2006 Gillette Tri-Nations tournaments due to injuries to Paul Sculthorpe. Leeds born Peacock joined the club he supported as a boy in 2006 from local rivals Bradford. He made his Leeds début against Huddersfield on the opening day of the season.

Peacock played for Great Britain while at Leeds in 2006 against New Zealand (3 matches), and Australia (2 matches), in 2007 against New Zealand (3 matches). He played in the 2008 Super League Grand Final victory over St. Helens. and was also part of the 2007, 2009, 2011 and 2012 Super League Grand Final squads and team that won the World Club Challenge against Manly Sea Eagles.

He played for England in 2008 against France. On 16 June 2008, Peacock was announced as the England captain for the 2008 Rugby League World Cup in Australia. In Group A's first match against Papua New Guinea he played as a prop in England's victory. He played against Papua New Guinea, Australia, and New Zealand (2 matches), in 2009 against France (2 matches), New Zealand and Australia.

He played in the 2009 Super League Grand Final victory over St. Helens at Old Trafford.

He was selected to play for England against France in the one-off test in 2010.

Jamie signed a new one-year deal at Leeds in July 2011.

Later that year he played as a prop for Leeds in the 2011 Challenge Cup Final defeat by the Wigan Warriors at Wembley Stadium.

He played in the 2011 Super League Grand Final victory over St. Helens at Old Trafford.

Peacock was appointed Member of the Order of the British Empire (MBE) in the 2012 New Year Honours for services to rugby league. On 26 June 2012, Peacock announced his retirement from international rugby league.

He played in the 2012 Challenge Cup Final defeat by the Warrington Wolves at Wembley Stadium.

He played in the 2012 Super League Grand Final victory over the Warrington Wolves at Old Trafford.

Peacock played in the 2014 Challenge Cup Final victory over the Castleford Tigers at Wembley Stadium.

He played in the 2015 Challenge Cup Final victory over Hull Kingston Rovers at Wembley Stadium.

Peacock announced that he would retire from the sport upon the conclusion of the 2015 season and take up the role of football manager at Hull Kingston Rovers.

He played in the 2015 Super League Grand Final victory over the Wigan Warriors at Old Trafford.

Peacock joined Hull KR as football manager for the 2016 Super League season. At the end of the regular season Hull KR finished 11th in the league and were forced to play in the 2016 Qualifiers. After four of the eight games with the team lying fourth in the qualifying table (only the top three are guaranteed Super League status for 2017, fourth play fifth for the last Super League spot) and with the squad depleted by injuries Peacock announced he was coming out of retirement to play in the last games of the season. He will continue with his regular duties alongside playing.

All content from Kiddle encyclopedia articles (including the article images and facts) can be freely used under Attribution-ShareAlike license, unless stated otherwise. Cite this article:
Jamie Peacock Facts for Kids. Kiddle Encyclopedia.