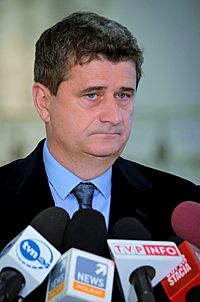 Janusz Marian Palikot, born in Biłgoraj on October 26, 1964, is a Polish politician, activist and businessman known for his controversial remarks.

He left the Civic Platform on October 6, 2010 and started his own party, Modern Poland on October 22.

All content from Kiddle encyclopedia articles (including the article images and facts) can be freely used under Attribution-ShareAlike license, unless stated otherwise. Cite this article:
Janusz Palikot Facts for Kids. Kiddle Encyclopedia.