The Japanese Bobtail is a breed of domestic cat with an unusual "bobbed" tail more closely resembling the tail of a rabbit than that of other cats. The variety is native to Japan and Southeast Asia, though it is now found throughout the world. The breed has been known in Japan for centuries, and it frequently appears in traditional folklore and art.

As in most other breeds, Japanese Bobtails may have almost any color (or colors, arranged in any number of patterns). Predominantly-white calicoes are especially favored by the Japanese and by cat fanciers, and strongly represented in folklore, though other coloration's are also accepted by breed standards. 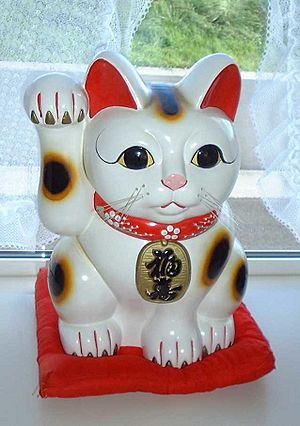 One theory of short-tailed cats in Japan indicates that they arrived from the Asian continent at least 1,000 years ago. In 1602, Japanese authorities decreed that all cats should be set free to help deal with rodents threatening the nation's silkworm population and associated industry. At that time, buying or selling cats was illegal, and from then on, bobtailed cats lived on farms and in the streets. Japanese Bobtails thus became the "street cats" of Japan.

The Bobtail cats are considered to be a lucky breed and to own one promises prosperity and happiness. The tricoloured, Mi-Ke (pronounced 'mee keh') is known as the luckiest colour for this breed. There is a Japanese statue of a cat with its paw in the air called Maneki Neko (translates to 'beckoning cat') and is an artist interpretation of the bobtail. These statues are common in many Japanese shops as they are thought to attract good people. 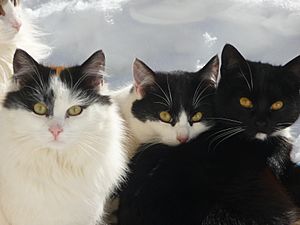 This breed is good for families. Due to their affectionate nature they make very good pets for children. They like to communicate with people using soft chirpy noises. This breed is highly attracted to water. They are very smart. This breed is known for their playful behaviour; they are always full of energy and mischief.

This breed has a minimal to medium amount of shedding, due to its short fur. Its coat is easy to groom.

Just like any animal, there can be a number of different health problems that could be related to the genetics. This being said, the Japanese Bobtails are generally healthy cats. The gene paired with the shortened tails is not associated with any spinal or bone abnormalities. The average lifespan for this breed is 9–15 years. 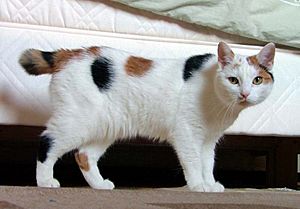 Generally speaking, members of the breed are active, intelligent cats, with a strongly human-oriented nature, are easier to train to perform tricks than most breeds, and are more likely to enjoy learning human-mediated activities like walking on a harness and leash, and playing fetch. They are very attentive, alert felines that notice a lot. Considered an unusually "talkative" breed, they often interact vocally with people. Their soft voices are capable of nearly a whole scale of tones, leading to a folk belief that they can sing.

The manga character Hello Kitty resembles a Japanese Bobtail, and is an example of contemporary kawaii ("cute") pop culture.

The character Muta from The Cat Returns was based upon a stray Japanese Bobtail that would often visit Studio Ghibli. They also tend to appear in other anime produced in Japan.

All content from Kiddle encyclopedia articles (including the article images and facts) can be freely used under Attribution-ShareAlike license, unless stated otherwise. Cite this article:
Japanese Bobtail Facts for Kids. Kiddle Encyclopedia.