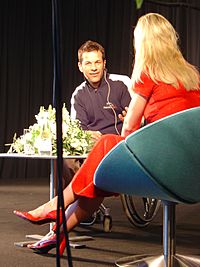 Jason Watt in 2004 being interviewed by Annette Heick.

Jason Watt driving for Den Blå Avis (Super Nova Racing) during the Formula 3000 race at the Circuit de Catalunya in 1998.

In 1995, Watt won the Formula Opel Euroseries and had a one-off outing in the German Formula Three Championship. In 1996 he followed several other "coming men" of the time, such as Dario Franchitti, Juan Pablo Montoya and Jan Magnussen, into the International Touring Car Championship, driving a JAS Engineering entered Alfa Romeo. He also kept his single-seater ambitions alive by contesting a round of the British Formula 2 championship for Fred Goddard Racing.

Watt's career had progressed as far as the International Formula 3000 championship by 1997, where he was a consistent frontrunner and was recognised as one of the best up and coming talents. In 1997 and 1998 Jason drove for David Sears' Super Nova Racing team, under the Den Blå Avis banner, in deference to his major sponsor. He won one race each year. For 1999 he was promoted to the main Super Nova Racing squad and was a championship contender, winning twice and finishing the year as championship runner-up.

Watt's single-seater career was curtailed by a motorcycle accident during the off-season late in 1999 which left him paralysed from the chest down. He has since continued to race successfully in touring cars driving specially modified cars, and in 2002 won the Danish Touring Car Championship.

In March 2008, Watt formed his own touring car team with a car from SEAT. Team Bygma Jason Watt Racing raced at the 2009 FIA WTCC Race of Germany.

In 2012 Watt moved from touring cars to Legends car racing. He also acts as team manager of Team Wounded Racing endurance team whose drivers are more or less physically disabled Afghanistan war veterans. All drivers have either amputations or spinal cord injuries.

All content from Kiddle encyclopedia articles (including the article images and facts) can be freely used under Attribution-ShareAlike license, unless stated otherwise. Cite this article:
Jason Watt Facts for Kids. Kiddle Encyclopedia.