Jay Pritzker Pavilion, Pritzker Pavilion, or Pritzker Music Pavilion is a band shell in the Loop community area of Chicago in Cook County, Illinois, United States. It is located on the south side of Randolph Street directly across from some of the tallest buildings in the world and east of the Chicago Landmark Historic Michigan Boulevard District. 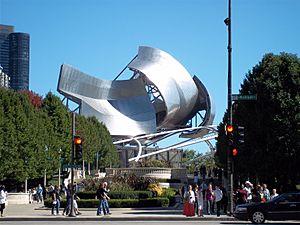 The performance venue is designed with a large fixed seating area, a great lawn, a trellis network to support the sound system and a signature Gehry stainless steel headress. It features a sound system with an innovative acoustic design that replicates an indoor concert hall sound experience. Millennium Park is built on top of a large underground parking garage. Construction started before the park's design was completed, and in January 2000, 17 additional caissons had to be added to the partially built garage to support the weight of Gehry's pavilion. In April the tops of all these caissons had to be rebuilt for changes in the pavilion's foundation.

The pavilion was named after Jay Pritzker, whose family is known for owning Hyatt Hotels. The building was designed by architect Frank Gehry, who accepted the design commission in April 1999; the pavilion was constructed between June 1999 and July 2004, opening officially on July 16, 2004.

The the pavilion is available, as is the entire park, as a venue for private events year-round. The stage's glass and steel doors enable it to provide indoor space protected from the elements when necessary.

All content from Kiddle encyclopedia articles (including the article images and facts) can be freely used under Attribution-ShareAlike license, unless stated otherwise. Cite this article:
Jay Pritzker Pavilion Facts for Kids. Kiddle Encyclopedia.