Jayanta Talukdar (born 2 March 1986 in Guwahati) is an Indian archer. He has won individual gold Medal in the 2006 Archery World Cup.

Despite losses in 2009, the Tata Steel sponsored Talukdar was seeded Number 1 for the 2009 World Cup in Copenhagen.

In November, 2015, he won Bronze medal in the 2015 Asian Archery Championships with Deepika Kumari in the Recurve Mixed Team event.

He is most probales in for the tokyo 2021 Olympics games 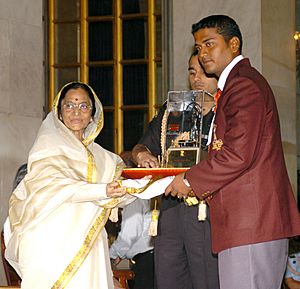 The President, Smt. Pratibha Patil presenting the Arjuna Award -2006 to Shri Jayanta Talukdar for Archery at a glittering function, in New Delhi on August 29, 2007

Jayanta was awarded the Arjuna Award in archery in August, 2006.

All content from Kiddle encyclopedia articles (including the article images and facts) can be freely used under Attribution-ShareAlike license, unless stated otherwise. Cite this article:
Jayanta Talukdar Facts for Kids. Kiddle Encyclopedia.